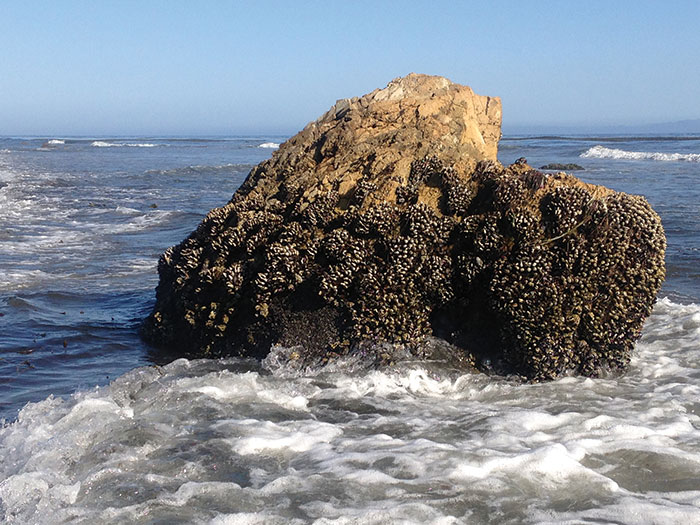 Credit: Emmanouela Filippidi
Mussels stick to a rock at low tide near the University of California, Santa Barbara, campus.

Mussels’ ability to cling to rocks in the ocean while being continuously battered by waves has prompted numerous scientists to design strong water-based adhesives for use in surgery and other applications. Now, taking inspiration from mussels’ byssal threads—the ultrathin, ropelike structures the mollusks use to lash themselves to rocks—Megan T. Valentine of the University of California, Santa Barbara, and coworkers have created a dry polymer that is strong, as well as tough and flexible (Science 2017, DOI: 10.1126/science.aao0350).

The tricks scientists use to improve a material’s properties often come at a price. For example, strengthening a polymer by introducing more cross-links can make it brittle.

To avoid some of these trade-offs, Valentine looked to the chemistry of mussels’ byssal threads. These stiff yet stretchy cylinders of collagen are surrounded by protein-rich cuticles and can bounce back into shape reasonably well.

One key piece of chemistry that mussels use in those protein-rich cuticles is iron-catechol bonding, Valentine explains. This kind of bond is nearly as strong as a covalent bond, she says, and a single iron ion can coordinate with multiple catechol groups.

To make their polymer, Valentine and coworkers first formed a network of covalent cross-links between the epoxy groups of poly(ethylene glycol) diglycidyl ether and the amine groups of 1,4-diaminobutane. Then the team introduced a protected catechol, 2-[[3,4-bis[(triethylsilyl)oxy]phenyl]methyl] oxirane, which formed more covalent cross-links with the remaining amine groups.

The next step was to deprotect the catechol groups and treat the resulting elastomers with iron nitrate, allowing a second set of noncovalent, reversible cross-links—the iron-catechol bonds—to form. These components are similar to ones used by mussels in the cuticles of their byssal threads.

When dried, the material had some remarkable properties compared with the same elastomer without iron. Its elastic modulus increased 770-fold, its tensile strength 58-fold, and its toughness 92-fold. The amount of stress required to permanently damage the polymer also increased 76-fold.

That the iron-catechol bonds are reversible is essential to the new material’s performance, Valentine says. When the material is stretched a long way, some iron-containing bonds break, dissipating energy and preventing big fractures. When the force stretching the material is removed, the broken cross-links can reform, not necessarily in exactly the same place, but nearby. “This maintains the material’s resiliency and lifetime even as its strength increases,” Valentine adds.

Iron-catechol bonds have been investigated before, but in soft, wet hydrogel adhesives. These materials swell when they absorb water, stretching the individual polymer chains so that they can extend no further, Valentine says. “In the dry system, the polymer strands remain compact, so there is a lot of room for each strand to stretch when loads are applied,” she says.

Karen I. Winey, who studies functional polymers at the University of Pennsylvania, says it is surprising that Valentine’s approach works for a dry polymer. Winey is impressed that the team managed to make a new material by combining a covalently cross-linked network and an iron-based system that relies on noncovalent, reversible bonding.

Comments
Morrison (November 2, 2017 10:38 AM)
Given its reversibility, I wonder if glues derived form this research would be useful for museum collections
Reply »

Aaron Amstutz (November 2, 2017 11:27 AM)
There are a number of synthetic analogues that already use this strategy of a blend of covalent cross-links with non-covalent metal-ion bonding. XNBR (Carboxylated nitrile butadiene rubber) is often cured with a combination of sulfur or peroxide (carbon-carbon) cross-links and zinc ion bonding between carboxyl groups. Many have added so-called metallic coagents (e.g. zinc diacrylate, calcium diacrylate) that generate a blend of covalent and ionic cross-links during curing of polymers that do not contain ionic bonding sites in the polymer backbone. Also, the strength of many sulfur cured elastomers are superior to other cure systems because the long sulfur crosslinks (an 8-sulfur-long linkage) can fracture and reform which protects the backbone of the elastomer.
Reply »