[+]Enlarge
Credit: Bioconjugate Chem.
The addition of polyethylene glycol to cysteine-17 on human ciliary neurotrophic factor is much more efficient when the reaction takes place under high pressure. 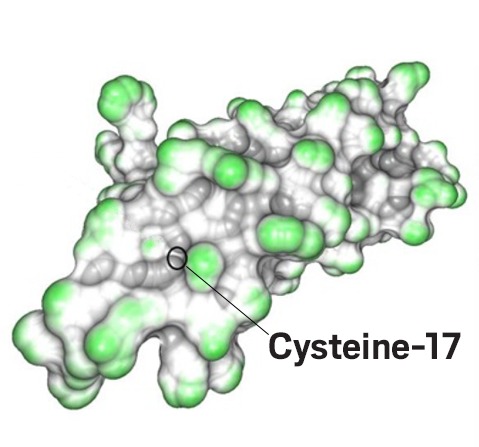 Credit: Bioconjugate Chem.
The addition of polyethylene glycol to cysteine-17 on human ciliary neurotrophic factor is much more efficient when the reaction takes place under high pressure.

Protein-based drugs are often used to treat conditions such as multiple sclerosis, hemophilia, or gout. But if used in their native form, they can be short-lived or trigger harmful inflammation. To prevent this, drugmakers attach polyethylene glycol (PEG), a polymer that stabilizes therapeutic proteins and enhances their efficacy, to specific sites within the protein—a reaction known as PEGylation. Now, scientists report that performing the reaction under high pressure conditions can make it vastly more efficient, bumping up yields of PEGylated proteins from 5 to 90% (Bioconjugate Chem. 2017, DOI: 10.1021/acs.bioconjchem.7b00531).

Although it’s well known that increasing pressure can speed up reactions, using high pressure to modify proteins is “not very conventional,” says Alexander Wei of Purdue University, who was not involved with the study. “This is not the sort of thing that a protein chemist might typically do, so it’s a nice insight into how one can modify proteins.”

One challenge when attaching PEG to specific sites on a protein is that the typical target amino acids are embedded deep within the protein’s folds and thus are inaccessible. Increasing pressure can temporarily unfold the protein, exposing the target sites for the chemical reaction. Yongdong Liu and Zhiguo Su of the Chinese Academy of Sciences tested the effects of pressure on PEGylation of human ciliary neurotrophic factor (CNTF), a protein that has been previously shown to reversibly refold at high pressure.

The researchers found that gradually increasing pressure during the PEGylation reaction increased yields so that at a pressure of 250 megapascals, 90% of the protein was PEGylated. Lower pressures didn’t improve the reaction’s efficiency as much, and the protein remained permanently unfolded at too-high pressures.

To confirm that PEG was attached to the correct site on the protein—in this case, a cysteine molecule—the team digested PEGylated and non-PEGylated CNTF with an enzyme and checked the size of the fragments using high-pressure size exclusion chromatography. Only the fragment containing the cysteine residue had increased in size, suggesting that this is where PEG had attached.

The conventional process of adding PEG to proteins takes several hours and can be expensive because large amounts of reagent are used. “What impressed me with this study was that they can do this modification really fast with almost no excess reagent,” says Nicole Nischan, a postdoctoral scholar at the University of Texas Southwestern Medical Center, who was not involved with the study.

Processing proteins under high pressure is simple and already approved for the food industry by the U.S. Food & Drug Administration, she adds. In future studies, researchers will need to analyze whether proteins that have PEG molecules added under high pressure function as well as those made in the conventional manner.

Although the approach may work for other proteins as well, “some proteins may be more sensitive to hydrostatic pressure than others, so they may not be able to regain structure if you applied pressure,” Wei says.