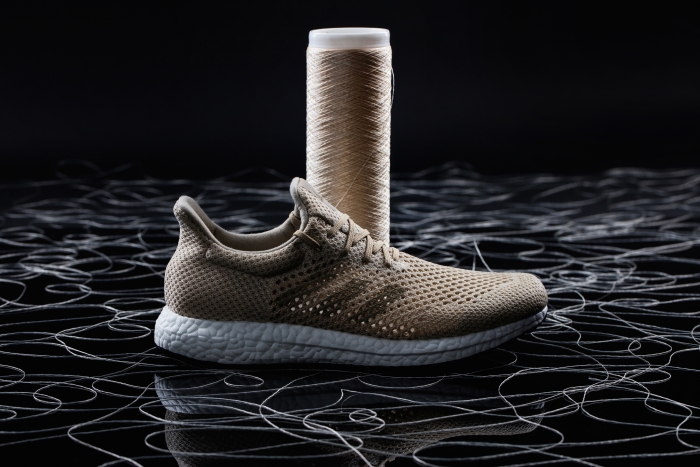 Adidas, The North Face, and Patagonia are among the brands jostling to become the first to launch a mass-market product made from synthetic spider silk. Adidas is racing to introduce a biodegradable running shoe made from the silk later this year. The North Face’s Moon Parka with waterproof spider silk fiber could become a must-have for eco-minded fashionistas.

But don’t ditch your old nylon running shoes and jackets quite yet. Behind the scenes, manufacturers are having problems translating lab-based processes for the novel material to commercial scale. Spider silk developers Bolt Threads and Spiber—both keen on explaining how their silk will change the world—have stumbled and been forced to delay initial product rollouts.

While the grind toward commercialization continues, companies are abuzz about possible uses for spider silk. It is made using renewable raw materials. It’s biodegradable yet waterproof. It’s strong and elastic. Spider silk is even garnering interest from developers of cosmetics and medical devices. And with academic researchers unearthing new knowledge about how to make it and enhance its functionality, spider silk’s range of potential applications continues to expand.

California-based Bolt Threads has the highest profile of the spider silk developers. It got off the ground with $40 million in funding and raised another $50 million last year to develop its textile manufacturing process. Bolt makes its silk protein via fermentation with recombinant yeast that contains DNA copied from spiders.

In 2015, Bolt said it would introduce a commercial spider silk thread-spinning process in the summer of 2016. That deadline came and went.

Now, the firm says the spinning process is in place. In the past few weeks, Bolt adds, it has begun transferring its lab-scale process into commercial-scale operations for three customers, including apparel maker Patagonia, with which it is developing non-toxic processes for textile manufacturing.

Bolt may not yet be selling its product commercially, but the firm is bullish about its chances of success. “We look forward to the fashion and function trends that Bolt Threads will lead in textiles,” it says.

Japan-based Spiber, which ferments its silk with recombinant Escherichia coli bacteria, has also experienced delays. The firm had planned to bring its first product—the $1,000 Moon Parka jacket, developed with apparel makers Goldwin and The North Face—to market at the end of 2016, but the launch has been pushed back to the first part of 2017.

Neither Bolt nor Spiber will say why it delayed rollout of its first products.

Even if Spiber goes commercial soon, Victor Oh, lead analyst for biobased materials with the market research firm Lux Research, is skeptical about the number of Moon Parkas that the company and The North Face will be able to produce. “I don’t expect to see a lot of it on the market,” he says.

The Moon Parka does show that spider silk is a premium material that can attract a premium price, Oh says. The challenge, he adds, will be competing on price in mass-market textile applications. Long term, spider silk developers have to target a cost of less than $10 per kg if their material is to compete with conventional textiles on a mass-market scale, Oh says.

Spiber has publicly stated that its commercial-scale silk will cost $20–$30 per kg.

Randy Lewis, a biology professor at Utah State University and a spider silk technology pioneer, can’t see any scenario where spider silk fiber can compete with basic nylon or polyester. “We are never going to make spider silk for $10 to $15 per kg, even with the perfect fermentation and purification process. It just can’t be done,” Lewis says. 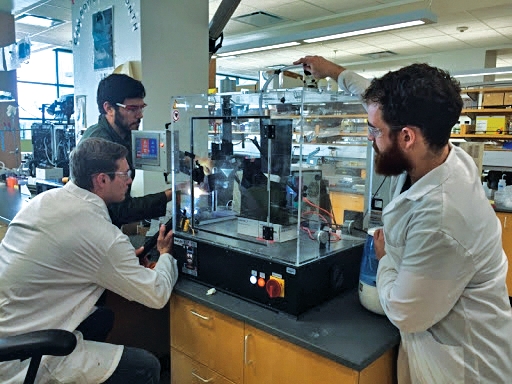 Bolt previously told C&EN that it is targeting a cost of $100 per kg. But the company has yet to unveil a full prototype product. “To me, this suggests it will be 2018 before they get something over the line,” Oh says. Nonetheless, he sees Bolt as one of the front-runners, along with Spiber and AMSilk.

Germany-based AMSilk is ahead of the pack when it comes to selling spider silk protein in nonfiber form. It has been selling its protein—made with E. coli fermentation—for cosmetics since 2014. The technology was developed by Thomas Scheibel, a professor of biomaterials at Bayreuth University.

The firm has since refined its spinning technology and is eyeing the use of its Biosteel brand spider silk thread in biodegradable footwear. Last year, the firm announced plans to make running shoes with apparel giant Adidas.

The shoe is going to be selling at a premium but not above prices for the premium sport shoe market.
Jens Klein, CEO of AMSilk, on the Adidas running shoe that will use its spider silk

Spider silk’s advantage over other naturally derived products is that it can be produced with consistent quality in the volumes required, Klein says. In the future, the firm may offer different grades. For instance, it could go a step below its optimal purification level for nonpremium applications, he says.

Cosmetics manufacturers typically order multiple kilograms of spider silk protein at a time. But AMSilk’s collaboration with Adidas is a larger-volume opportunity. Adidas wants to sell hundreds of thousands of the shoes. “This very quickly brings us into the multi-ton area. We are on our way,” Klein says.

Adidas has chosen spider silk for the shoe primarily because it is made from renewable resources and is biodegradable. “The shoe is going to be selling at a premium but not above prices for the premium sport shoe market,” Klein says.

Klein claims not to have had sleepless nights over production scale-up. AMSilk already successfully contracts out its spider silk protein production, and the market has spare capacity, he says. For spinning, AMSilk has some capacity in-house. With the Adidas contract looming, it is considering whether to expand this or outsource production, Klein says.

AMSilk’s medical applications are also moving forward. The firm has spent the past two-and-a-half years testing to ensure spider silk is safe to go inside people. A spider silk protein film does not kill bacteria but rather prevents them from colonizing. That feature could make it useful for coating materials, such as breast implant linings, that come into contact with people.

Lewis’s lab at Utah State is also looking at the use of spider silk protein coatings in medical products such as sutures, artificial ligaments, and wound patches.

Unlike other organizations, though, Lewis is developing a suite of hosts for producing spider silk proteins, including genetically engineered E. coli, goats, silkworms, and alfalfa. “We are now making sure we can scale up so we can do prototype development. We’re teaming up with companies,” he says.

Lewis acknowledges challenges. “When it comes to E. coli, I’d like to say we have got things sorted, but this is not the case yet,” he says. “The major challenge is a purification protocol that is both efficient and as cheap as possible.”

Lewis has two 500 L fermentation reactors at his disposal for making spider silk protein with genetically engineered E. coli. By summer he will be able to generate about 1 kg of protein per week, he figures. “For most prototypes, it should be fine.” A decision will be made in the coming months as to which application to commercialize first.

[+]Enlarge
Credit: AMSilk
AMSilk is still deciding whether to outsource its spider silk fiber production or make it in-house. 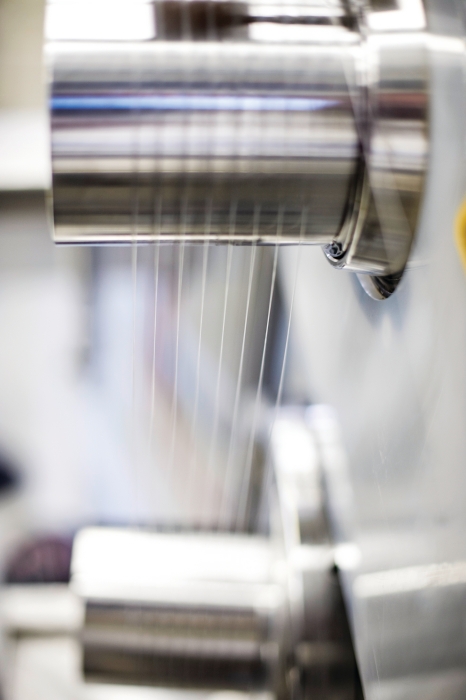 Credit: AMSilk
AMSilk is still deciding whether to outsource its spider silk fiber production or make it in-house.

Lewis’s transgenic goats generate spider silk protein in their milk. The best goats produce 8 L of milk per day with a protein yield of 2 g/L. The purification process is straightforward, Lewis says, and scale-up can be rapid. “In less than a year, we could clone 100 goats from the eight to 10 top-producing goats that we have,” he says.

Indiana-based Kraig Biolabs has engineered a transgenic silkworm that generates a hybrid of worm and spider silk. For Kraig, scale-up starts with the planting of mulberry trees to provide silkworm food.

The firm says it will soon start planting 2,000 trees at a newly acquired site in Texas. It already has a facility in Indiana about one-tenth the size that generates enough silk to supply the Army with test material for ballistic clothing. The firm’s long-term sights, though, are on production in Vietnam, where an established silkworm industry already exists.

While companies move forward in fits and starts, progress in academic labs could broaden the application of spider silk in next-generation products.

For example, the Karolinska Institute recently published a study showing that synthetic spider silk fiber strength can be enhanced markedly if the silk is spun in a way that mimics the spinning glands of spiders (Nat. Chem. Biol. 2017, DOI: 10.1038/nchembio.2269).

Developments in a lab run by Neil R. Thomas, professor of medicinal and biological chemistry at the University of Nottingham, point to new applications. David Harvey, while a Ph.D. student in Thomas’s lab, published research showing that it is possible to conjugate organic ligands to spider silk to confer either antibiotic or fluorescent properties (Adv. Mater. 2016, DOI: 10.1002/adma.201604245).

A commercial spider silk antibiotic dressing could be on the market within four or five years after clinical trials involving conditions such as diabetic ulcers, Thomas says. Harvey’s paper has already attracted messages from spider silk producers interested in collaborating on the technology, Thomas adds.

For spider silk firms, adding functionality is a likely key to long-term success. Before then, however, they must overcome their teething problems and get those Adidas shoes and that Moon Parka out of the lab and into clothing stores.

CORRECTION: This story was updated on Feb. 28 to correct the description of Bolt Threads’ relationship with Patagonia. The update also removed a reference to waterproofing technology, since Bolt says this is not a focus of its efforts.

Comments
SHASHIKANT MANDAL (February 24, 2017 10:39 AM)
A very very interesting article Alex, kudos to your style of writing - you have covered each and every aspect about the topic and made me read the whole article in one go ! Fantastic !

Your article has inspired me to take this forward !