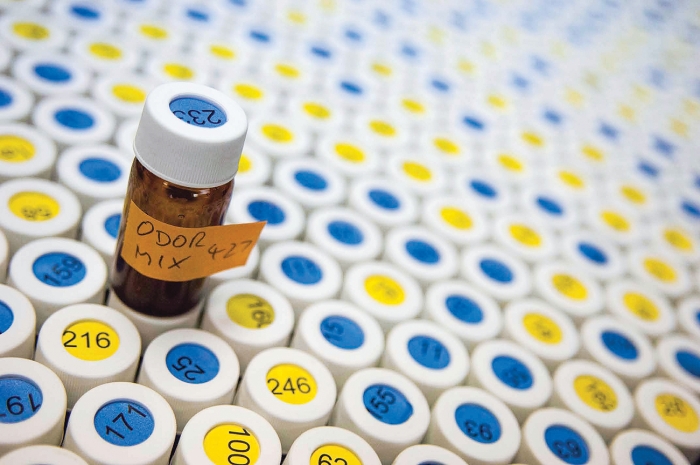 Credit: Rockefeller University
Human sniffers evaluated the odors of 476 compounds in vials for a new study.

A team of researchers and volunteers from across the globe have trained computers to predict the way a molecule will smell based on its structure. The feat may help scientists unravel the still-mysterious relationship between molecular structure and odor perception (Science 2017, DOI: 10.1126/science.aal2014).

This achievement in machine learning could also be a boon to the fragrance industry, saving time and money that would otherwise be spent on laborious human sniff testing. It even suggests that computers might one day identify molecules by their odor.

To tackle the complex and poorly understood phenomenon of olfaction, an international team led by Pablo Meyer at IBM and Leslie B. Voshall and Andreas Keller at Rockefeller University devised a crowdsourced project, the DREAM Olfaction Prediction Challenge.

Olfaction study by the numbers

▸ 476: Number of molecules sniffed by each human

▸ 19: Number of “smells,” such as garlic, fish, or flower, the humans rated for each molecule

They assembled a huge set of human odor perception data by arranging for 49 people to sniff 476 molecules in separate vials. These human sniffers categorized each molecule according to various odor qualities such as “garlic,” “sweet,” “fruit,” “spices,” “burnt,” “urinous,” “decayed,” and “fish.” The group also collected 4,884 structural features such as atom types and functional groups from the molecules.

Then, the IBM-Rockefeller team provided a portion of these data to 22 volunteer teams of computer scientists who used it to develop machine-learning algorithms that can predict a molecule’s scent. Eventually, the volunteer teams received the remaining data to test their algorithms’ predictive capabilities.

The models performed surprisingly well, and a final model, which the IBM-Rockefeller group generated by combining various volunteer algorithms, was able to accurately identify a molecule’s “pleasantness” and “intensity,” as well as eight out of 19 other odor qualities initially assessed by the human sniffers.

The results show that computers can zero in on molecular characteristics responsible for odors that humans aren’t able to discern by looking at a molecule’s structure.

The IBM-Rockefeller effort is “a major step forward in decoding how the brain interprets messages from the nose,” says Eric Block, chemistry professor at the University at Albany, SUNY, and an olfaction chemistry expert.

Scientists have never had a good handle on what makes a molecule smell the way it does. Theories about odor perception generally involve the binding of molecules to receptors in the nose. These hypotheses are complicated by the fact that some very differently shaped molecules can have similar smells, whereas similarly shaped molecules can sometimes smell quite different from each other.

Scientists recognize that the use of machine learning to unravel these mysteries is in its infancy. The authors of the new study envision future experiments involving odor mixtures and human sniff data sets that incorporate different cultural and genetic populations.

Given that so much remains to be discovered about human odor perception, the identification of molecules based on their odor “may be on the horizon but is not yet in hand,” Block observes.

Still, the authors note, this new strategy may accelerate efforts to understand basic interactions between odor molecules and their receptors and “test predictive models of olfactory coding in both humans and animal models.”

Robert Buntrock (March 2, 2017 4:44 PM)
[Submitted the 2nd time, didn't take the 1st time for some reason]
Very interesting. Can the program detect the variance in the human detection/non-detection of asparagus metabolites in urine? Can it routinely "smell" the t-butyl group?
Reply »