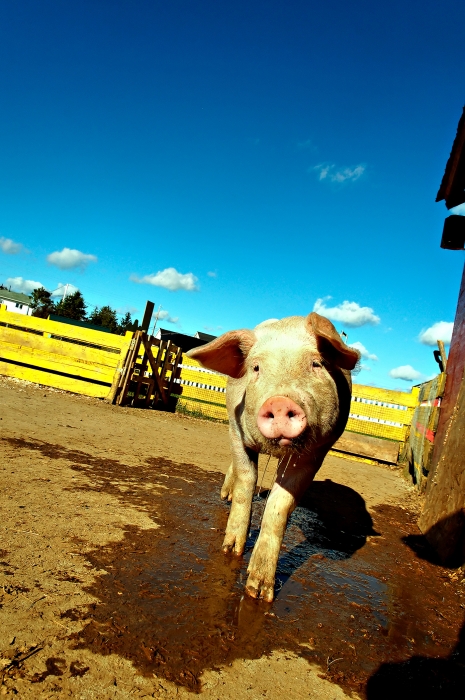 Anyone who has ever been to a farm knows there’s no shortage of drool dangling from the mouths of barnyard animals. Those super-active salivary glands could someday be put to good use, according to a new study.

Protein drugs, such as blood-clotting factors and insulin, are often produced in large vats of genetically engineered cells. Sometimes, if bacterial or yeast cells are used, the protein drugs may lack the appropriate chemical modifications that occur in mammalian cells, such as glycosylation.

To get around that limitation, some scientists have turned to harvesting the proteins from transgenic animals. ATryn and Ruconest are two such therapeutic proteins produced in the milk of genetically modified animals in Europe and the U.S.

In the new study, Wu’s team looked to produce NGF, a protein widely studied because of its therapeutic implications in a number of neurological diseases, including Alzheimer’s, Parkinson’s, spinal cord injury, and glaucoma.

Wu and colleagues engineered mice to produce human NGF protein specifically in their salivary glands. To collect the NGF protein, the researchers anesthetized the mice and administered pilocarpine hydrochloride, a known salivary stimulant. After purifying NGF from the saliva, the team showed that the protein was functional, triggering rat adrenal gland cells to become neuronlike.

“Currently we are working on using this process in pigs,” Wu says, adding that his team has already developed methods for “repeated, long-term, and large-volume collection of saliva from pigs.”

Enqi Liu of the Laboratory Animal Center at Xi’an Jiaotong University School of Medicine says that compared with milk, saliva would be especially “susceptible to microbial contamination,” posing a further complication for purifying the proteins.

But could scientists produce a high enough concentration of a protein and collect a large enough volume of saliva to make spit a viable option? “In theory, I think it could work,” says Karen Beauchemin, a ruminant nutrition scientist at Agriculture & Agri-Food Canada. Beauchemin says dairy cows produce more than 200 L of saliva in a single day. Wu says swine produce about 15 L of saliva per day, and his team has been able to collect 3 L of spit per day from pigs, for 40 days straight, without any apparent harm to the animals.