[+]Enlarge
Credit: Wikimedia Commons
Theodor von Holst’s steel engraving of Frankenstein fleeing his laboratory in horror was used as the frontispiece of the 1831 revised edition of Shelley’s novel published by Colburn & Bentley, London. 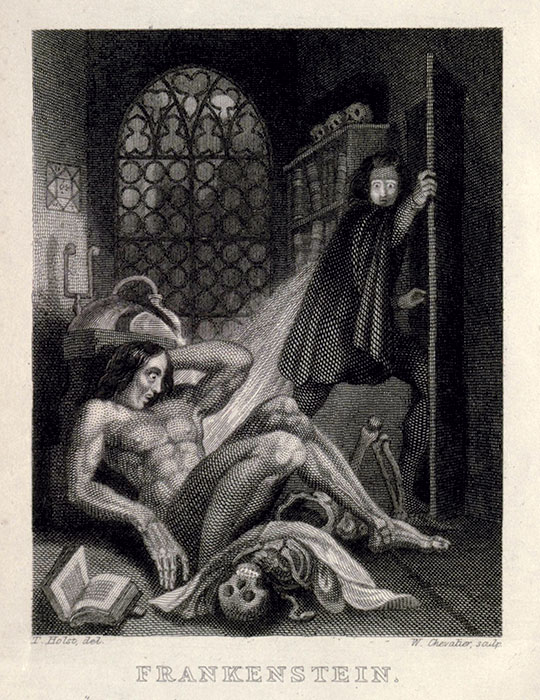 Credit: Wikimedia Commons
Theodor von Holst’s steel engraving of Frankenstein fleeing his laboratory in horror was used as the frontispiece of the 1831 revised edition of Shelley’s novel published by Colburn & Bentley, London.

It was in a villa on Lake Geneva in 1816. It was “a wet, ungenial summer, and incessant rain often confined us for days,” remembers Mary Wollstonecraft Godwin. They were sitting together—Godwin; her soon-to-be husband Percy Bysshe Shelley; the poet Lord Byron; and John William Polidori, a physician and writer credited with pioneering the vampire novel. As the group sought diversion, Lord Byron decreed, “We will each write a ghost story.” Mary, all of 18, actually finished one. And what a story!

“Frankenstein,” informed by days of discussion in this remarkable group on Lake Geneva, much of it touching on galvanism, the recently identified effect through which electric current causes muscle contraction in (frog) body tissue, gave us a monster for the ages.

And who among us has not personally encountered that monster in one or more of its many incarnations? I saw the Boris Karloff films, 15 years after they were made, in Saturday matinees in Williamsburg, Brooklyn. I saw a lurch of Frankensteins (not Mary’s good Ingolstadt university student but the creature that today popularly bears his name) on a Rio de Janeiro Carnival float in 2004. Frankenstein lives, the creature and the creator coalesced in our imaginations. Perhaps if Mary Shelley had given a name to the man the natural philosophy student assembled and gave life to, it would be otherwise. But then perhaps the fictional scientist deserves his fate. Monster and man.

Related: Back To The CoffeeHouse

Originally titled “Frankenstein; or, the Modern Prometheus,” Shelley’s novel debuted on Jan. 1, 1818. Two updated editions appeared in her lifetime, followed by many theatrical and film adaptations, including an early Thomas Edison movie. The story has come to dominate the modern imagination. It defines our concept of the monster, but it is also—and this is important to us—a primal metaphor of the way in which science has gone wrong. Yet it is a love story.

Love? Yes. But what of science? Is there also chemistry in the making of the beast? And what does the persistence of Shelley’s horror story tell us about what we do?

The nameless creature that Frankenstein (let me resist, as Shelley did, giving Victor Frankenstein a doctorate) shocks life into is a biological creation. But chemistry, as it turns out, gets good marks in the book: A pompous physics professor does not impress the student Victor at Ingolstadt. One M. Waldman, a chemistry professor at the university, on the other hand, tells him good things of alchemists: “These were men to whose indefatigable zeal modern philosophers were indebted for most of the foundations of their knowledge.” Chemistry becomes from that day Frankenstein’s passion. Though he assembles his creature from biological parts, he is described carefully cleaning his chemical instruments as he vacates his laboratory. Movie directors have not neglected Frankenstein’s chemical laboratory skills.

As we move into the book with its intricate matryoshka of three narratives related by key characters, we see that the creation of life is not foremost on Shelley’s mind. She tells a nested story of passions, of people impelled to do things that can and do go wrong.

“Frankenstein” is in fact a multilayered love story—the tale of a lonely creature’s love for his maker and for the good people he encounters. He is desperate for a mate. And he turns into a murderer and is crazed by it. Victor, meanwhile, is confounded by his passions, unable to turn his love for his father, for his best friend, for his beloved fiancée, Elizabeth, into the desperate confession of his own transgression that he and his loved ones need. Until it is too late.

How interesting that Mary Shelley, who worked to reform society rationally (as did her father, the political philosopher William Godwin, and her mother, the ardent feminist Mary Wollstonecraft), who emphasized cooperation and the work of women in her writing, is best known for a unique work of fiction in which passion and not reason, the Romantic ideal, rules people’s lives.

Romanticism is eternal, but literary genres evolve. And there has been a ­subtle shift in the profitable theater of horror arguably founded on the first adaptations of “Frankenstein.” The old standbys of the vampires of Transylvania (a lovely place in reality) have recently been joined by newbies: transformed zombies. Creatures bursting out of humans à la “Alien” have always been scary. But, in a modern twist on what frightens us, we have films where the artifactual, the unnatural, not only looks like us but also is beautiful. I am thinking of the recent “Ex Machina” and perhaps the “Blade Runner” films. The potential of attractive artificial intelligence to frighten us is just surfacing.

Mary Shelley’s book is subtitled “The Modern Prometheus.” And she wrote it at the same time that her husband was at work on his creative retelling and completion of the lost Aeschylus cycle of plays about the Titan who created man from clay and brought fire to humanity in defiance of the gods. The reference to Prometheus in the subtitle is hardly ironic. To the Shelleys, Prometheus represents intelligence, striving, a love for people. And their epoch was one of astonishing scientific discovery—Uranus had recently been discovered by William Herschel, and the renowned chemist Humphry Davy, while isolating new elements and experimenting with laughing gas, was an associate of the great Romantic poets and himself wrote verses. The fire that Prometheus brought to people was then, and is still, at the heart of chemistry.

Related: Frankenstein At The Circus

Stilted and overwrought as her expression may seem to us today, there is an essential aspect of the Prometheus myth that Mary Shelley captured. She saw, and made us think of, the risk around the bend from Prometheus’s god-defying action. In aspiring to what one could (but perhaps should not) do, in striving beyond the “natural” and acting on ambition—in these lurk hazards. One requires what Prometheus’s name means, “forethought.” In this, Victor Frankenstein failed, and suffered.

At about the midpoint between the date of Mary Shelley’s book and our time, the evolutionary biologist and scientific polymath J. B. S. Haldane wrote:

The chemical or physical inventor is always a Prometheus. There is no great invention, from fire to flying, which has not been hailed as an insult to some god. But if every physical and chemical invention is a blasphemy, every biological invention is a perversion. There is hardly one which, on first being brought to the notice of an observer from any nation which had not previously heard of their existence, would not appear to him as indecent and unnatural (“Daedalus; or, Science and the Future,” 1923).

People who have lived longer because of paclitaxel or who can see clearly thanks to the various lens polymers used in the treatment of cataracts will not agree. But Haldane touches on the natural sense of spiritual discomfort we feel, or should feel, at tampering with nature. That it is done for the good—our own or that of others—I think just helps us bury the natural disquiet. 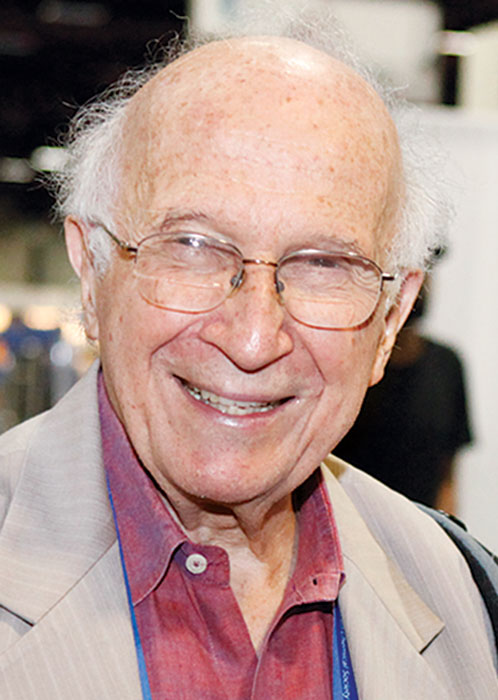 It has been a good 200-year run for this frightening story of the scary mix of passion, ambition, and transgression. The science in Mary Shelley’s classic is just a stand-in, a prompt for our struggles with what is natural and what is not, with what being human means. It is good that Frankenstein, creator and creature conflated, will not leave us.

Roald Hoffmann, the Frank H. T. Rhodes Professor of Humane Letters at Cornell University, received the 1981 Nobel Prize in Chemistry along with Kenichi Fukui. He is also the inaugural winner of the Primo Levi Prize, presented jointly by the German Chemical Society and the Italian Chemical Society. Named after Primo Levi, the Italian Jewish chemist, writer, and Holocaust survivor, the award honors chemists whose work promotes human rights and improves the dialogue between chemistry and society. Hoffmann is an accomplished poet and playwright.

Periodic Table
From our archives: An essay on silver, by Alan Shaw
Physical Chemistry
The Role Of Myths
Biological Chemistry
Citizen Of The World
Share X
To send an e-mail to multiple recipients, separate e-mail addresses with a comma, semicolon, or both.
Title: Creature and creation
Author: Roald Hoffmann
Chemical & Engineering News will not share your email address with any other person or company.

Comments
Fred Schaefer (January 3, 2018 7:44 PM)
For fans of Shelly's Frankenstein - the manuscript is on display at the The Rosenbach Museum in Philadelphia through February 11, 2018.
Reply »