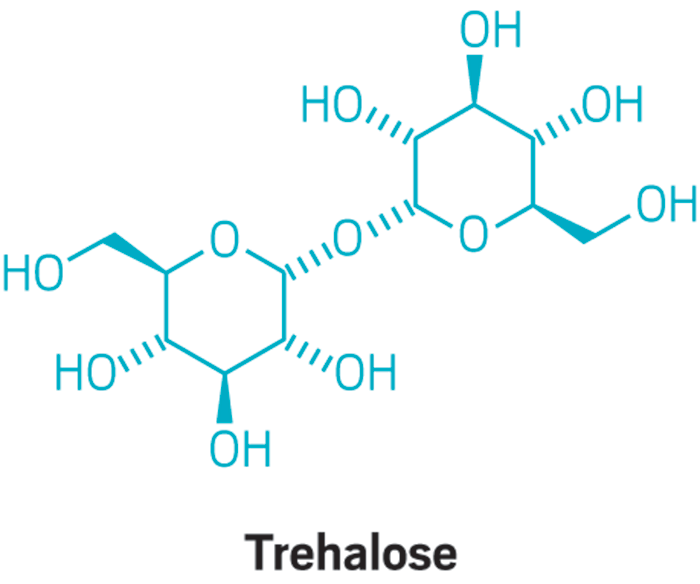 In the early 2000s, epidemic strains of the bacterium Clostridium difficile, which can cause life-threatening diarrhea, began to emerge in the U.S., Canada, and several European countries, and have since spread around the world. But why two virulent types of the bacterium, known as RT027 and RT078, became so prevalent so quickly has been a mystery. Now, researchers led by Robert A. Britton at Baylor College of Medicine believe they have identified a chemical culprit: the disaccharide trehalose.

Britton’s team found that both RT027 and RT078 thrive on small amounts of trehalose, a sweetener that retains water and is added to pasta, ice cream, and ground beef. In RT027, a single amino acid change in one protein makes it possible for the bacterium to grow on low levels of trehalose. The researchers also found that improved trehalose metabolism in RT027 leads to higher levels of a C. difficile toxin. Independently, RT078 has acquired four different genes that enhance its ability to consume and metabolize the disaccharide (Nature 2018, DOI: 10.1038/nature25178).

Scientists had known about RT027 and RT078 long before the outbreaks in the early 2000s, but because of production costs, trehalose was not used as a food additive before that time. A novel enzymatic method for making the disaccharide from starch brought its cost down from around $700 per kg to about $3.00 per kg, and trehalose received approval as a food additive in the U.S. in 2000 and in Europe in 2001.

The resulting addition of trehalose to people’s diets, the authors believe, has contributed to the deadly C. difficile epidemics.