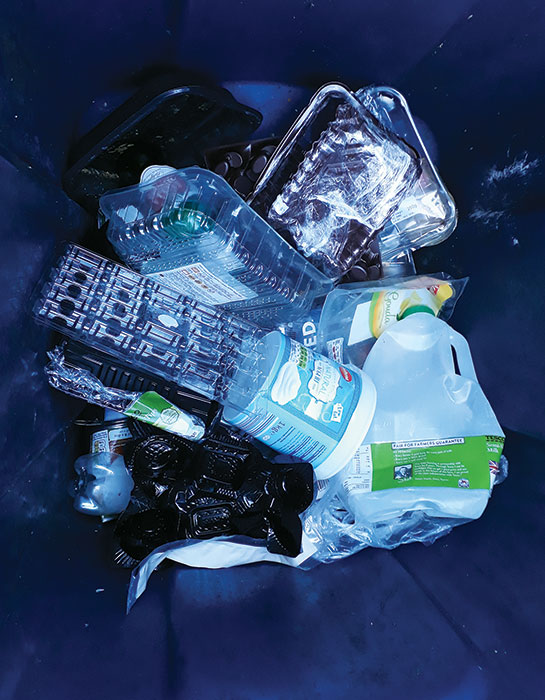 Credit: Alex Scott/C&EN
The EU plans to recycle at least 55% of packaging waste by 2030.

Currently, less than 30% of the 26 million metric tons of plastics waste collected in Europe each year is recycled. Much of the rest is incinerated, placed in landfills, or shipped outside the region.

The Commission will provide $120 million to fund innovations in plastics recycling, including the development of processes for making plastics recyclable and systems for removing hazardous substances and contaminants.

Six European plastics recycling industry organizations, including Plastics Recyclers Europe and European Plastics Converters, say they welcome the Commission’s strategy. They pledge to launch new initiatives in a bid to recycle 50% of all plastics waste—including packaging—in Europe by 2040.

PlasticsEurope, an industry association whose members make new plastic, says it is committed to ensuring 60% of plastic packaging is reused or recycled by 2030.

In an attempt to reduce the number of plastic particles entering the aquatic environment, the Commission proposes restricting the use of particles less than 5 mm in size in products such as cosmetics and detergents. The Commission also proposes that oxo-plastics, which break down into small fragments in the environment, should be banned.

Europe’s new plastics strategy comes on the heels of China’s ban on imported plastic waste. Many European companies now have a growing plastics waste disposal problem as a result.

The EC claims its strategy will deliver economic as well as environmental benefits. Just 5% of the value of Europe’s plastics waste is recovered, meaning that between $85 billion and $128 billion is lost to the region’s economy every year, says Jyrki Katainen, the Commission’s vice president for jobs, growth, investment, and competitiveness.