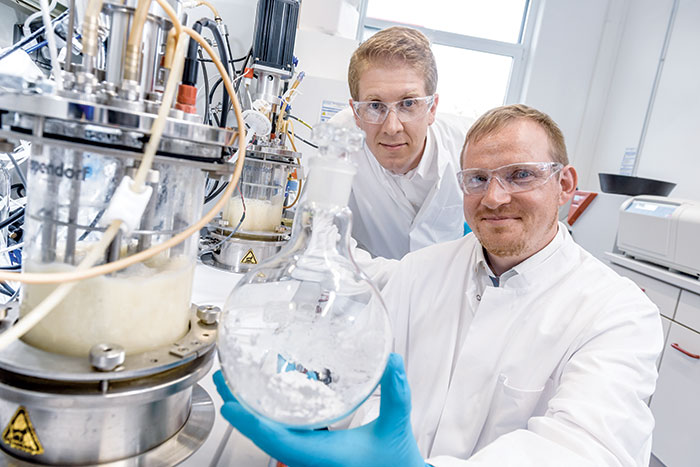 German start-up Numaferm has developed a biotech process that it claims will reduce the cost of making peptides—long chains of amino acids typically used as drugs—at industrial scale by orders of magnitude.

▸ Strategy: Initially to target pharma compounds, then branch out into fields such as cosmetics, paints, adhesives.

Numaferm’s fermentation technology is applicable to peptides made with natural amino acids, a family that makes up about half of the $1 billion-per-year global peptide synthesis market. The firm thinks it can squeeze pharmaceutical-grade peptide costs from an average of $1.2 million per kg for the current synthetic method to between $50,000 and $100,000.

At this cost differential, leading commercial peptide firms such as Bachem, CordenPharma, and Polypeptide Laboratories would appear to have a fight on their hands. All three firms declined to talk with C&EN about the new challenger.

Numaferm hopes its technology will also make peptides cheap enough to be used profitably in consumer products such as cosmetics and paints.

The firm’s small team is now fully immersed in scaling up its technology. “Our clear target is to deliver peptides in the kilogram scale in a few years,” says cofounder Philipp Bürling.

Even start-ups with good technology don’t always fulfill their commercial potential. And at just a year old, Numaferm still has a way to go. Despite these potential pitfalls, some industry experts consider Numaferm well-positioned for success.

Enzymes and pharmaceutical proteins are already made by genetically engineered microorganisms, but biotech production of peptides has been limited, Numaferm says, by three problems: the presence of peptide-destroying proteases, aggregation of peptides that complicates downstream processing, and the toxic effects of peptides on the production host.

As a result, commercial peptide drugs are now mostly made by a multistep chemical synthesis that involves linking amino acids together via amide bonds in liquid or solid phase. The procedure is laborious as it requires a coupling reaction, along with a protection step, for each amino acid.

Numaferm claims to have solved peptide fermentation’s problems by genetically inserting a transport compound into its host bacteria, Escherichia coli, that’s fused to the peptide being expressed.

The firm avoids destruction of the peptide by proteases by engineering the bacteria to secrete the fused pair into the protease-free environment outside the cell.

The transport compound, dubbed Numatag, also increases the stability and solubility of the peptide, counteracting aggregation. In addition, it prevents the return of the peptide to the host, avoiding toxic effects.

“To make a new product, the only change needed is the genetic information of the target peptide,” says Numaferm’s CEO and cofounder Christian Schwarz. The firm has one U.S. patent and has one patent pending.

Making 1 kg of peptide with the process requires only a few hundred kilograms of low-cost carbohydrate feedstock, Numaferm says. In contrast, making 1 kg of peptide using chemical synthesis can consume more than 25 metric tons of raw materials—including some potentially toxic and expensive compounds.

This is where Numaferm may have an advantage, says Belgium-based peptides consultant Alain Scarso. “Some polypeptides, such as epitopes, have sequences of more than 70 amino acids for which the development of their manufacturing process through chemical synthesis is lengthy and costly,” Scarso says. He estimates that over half of the more than 200 peptides that are commercialized or in development could benefit from Numaferm’s technology.

Scarso figures Numaferm could cause ripples across the sector. “The recombinant DNA approach should be more attractive in terms of costs, and have lower environmental impact and faster development time, than the current chemical manufacturing technologies,” he says.

One shortcoming is that Numaferm’s technology cannot produce peptides that contain unnatural amino acids or other chemical entities. But even here Scarso sees potential to start such peptides with the technology and then modify them chemically.

If Numaferm is to realize its potential, though, it will have to overcome its lack of experience as well as the market presence built up by its larger competitors over decades. The company is working on scaling up production to hundreds of grams, but it has yet to make any commercial-scale products.

Add to that, Schwarz, the company’s CEO, is inexperienced as a business person. Until about a year ago he was focused on academic research at the Institute of Biochemistry at Heinrich Heine University Düsseldorf, where he codeveloped the technology. “The step out from academia to industry is quite a big one,” Schwarz acknowledges, “but I am loving it.”

Despite this lack of experience, Schwarz and his team convinced German specialty chemical giant Evonik Industries—along with a handful of other investors—that their technology is the real deal. Last year, Evonik and the other partners made an investment in Numaferm that was pegged at a little less than $10 million.

“Numaferm’s technology is highly disruptive. We expect existing markets to change dramatically and new markets to develop,” says Bernhard Mohr, head of venture capital at Evonik. “A strategic fit with Evonik’s existing technology, a strong scientific background and a dedicated team—that is what we are looking for in a start-up. Numaferm has it all.”

The start-up’s primary target is the pharmaceutical peptides market. “This is where peptides are best known and where we can be benchmarked against chemical synthesis,” Bürling says. But Evonik notes that the technology could open up new applications for peptides in areas such as cosmetics, functional coatings and adhesives.

Numaferm’s two cofounders say they are cautious not to get ahead of themselves. Their near-term goals are all about production scale up. Ultimately, the firm plans to outsource production of batches above the gram scale. It is also willing to license out its technology.

Established peptide producers might say that Numaferm still has much to prove. But if the company succeeds in scaling up its technology at the costs it expects, chemical synthesis of natural peptides will quickly look very expensive.

CORRECTION: This story was modified on Jan. 22, 2018, to correct a description of peptides.