What’s artificial snow, and how is it made?

When nature won’t cooperate, people use myriad methods to craft snowscapes for all occasions 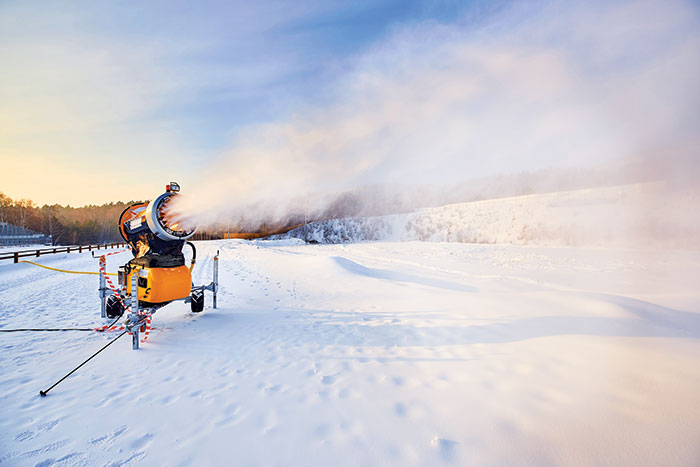 Credit: Shutterstock
Snow guns are commonly used to spruce up ski slopes, either taking the place of natural snow or enhancing what’s already there.

Winter snowfalls herald all manner of fun and games: snowball fights, skiing, tobogganing, snowboarding, and, every four years, couch potato-ing as people all over the world watch the Winter Olympics. But what’s a winter sports enthusiast to do if the coveted precipitation doesn’t make an appearance?

That’s when artificial snow comes in.

Over the years, human ingenuity has provided myriad ways to create or enhance snowscapes in all kinds of scenarios. One of the earliest ways to fake snow was simply by pulverizing large blocks of ice and spreading the shavings, but the material is very heavy and melts quickly. Nowadays, faux snow is no problem, whether you need to spruce up a ski slope or create a picture-perfect scene for the silver screen.

Using machines to make snow is commonplace for outdoor winter sports, including downhill skiing and snowboarding. Ski resorts, hoping to extend the season or simply enhance existing natural snow, pump water and pressurized air uphill to “snow guns” stationed along the slopes. The snow guns atomize the water and spray out a long plume of fine droplets, which hopefully freeze before hitting the ground.

In 1980, the Olympics held in Lake Placid, N.Y., became the first Winter Games to use machine-made snow, but they weren’t the last. Artificial snow also made an appearance at the two most recent Winter Olympics, in Sochi, Russia (2014), and Vancouver, British Columbia (2010).

With the approach of the 2018 Olympics in South Korea, snow guns are standing by at Jeongseon Alpine Centre, the site of the games’ alpine speed events, according to the website of manufacturer SMI. And the 2022 Winter Olympics in Beijing will have to rely almost entirely on snowmaking to offset the region’s minimal precipitation.

As long as the temperature remains below about –8 °C, snow guns can readily produce as much snow as needed. When the thermometer reads higher, the water needs a little help to freeze.

Natural snow forms in clouds when water molecules organize around a nucleator, a particle that acts as a scaffolding to “kick-start” ice crystal formation, says Daniel Cziczo, an atmospheric chemist at Massachusetts Institute of Technology. These nucleators often have a hexagonal binding structure that mimics that of water, although scientists aren’t certain the hexagonal structure is required. Once the binding gets started, the rest of the water molecules begin to knit together as ice, Cziczo says. Mineral dust, clay particles, and even bacteria can all serve as nucleation sites.

Earthbound snow guns, however, don’t always have the benefit of the atmosphere’s cold temperatures. Thus, artificial snowmakers have borrowed some nucleation ideas from on high to help water freeze more rapidly at temperatures closer to –5 °C or higher.

One such product is Snomax, a freeze-dried protein powder sold by Snomax International in Denver that gets mixed into the water pumped uphill to snow guns. Snomax derives its nucleating ability from Pseudomonas syringae, a bacterium commonly found on agricultural crops and other plants, as well as in the atmosphere. P. syringae has a powerful nucleating protein on its cell surface, with which it creates an icy spear to pierce plant cells and then feast upon their contents.

Drift, a snowmaking additive launched in 2001 by Aquatrols in Paulsboro, N.J., is a liquid polyether-substituted trisiloxane that acts as a surfactant. By reducing the surface tension of the water sprayed out of snow guns, this surfactant helps the droplets freeze more rapidly rather than clump together, says Andy Moore, the sales director for Drift. This ability helps increase the high-temperature window for snowmaking by about 1 °C and can improve snow quality at lower temperatures, he says.

“What we do is real snow,” Moore points out. “We’re just helping to make it.”

For snowscapes that require a higher degree of control, like movie and television sets, an array of truly artificial snow products are available. Most of those in use today, according to Roland Hathaway, of Snow Business Hollywood, are paper based, though that wasn’t always the case.

Cornflakes, painted white, are an early example of a faux film snow, Hathaway says, but that crunchy snow stand-in faded quickly with the advent of audio recording. Firefighting foam, instant potato flakes, and flour have also graced the silver screen. Marble dust was famously used in filming “Doctor Zhivago,” and gypsum salts are another alternative still in use today.

Paper, however, is the most popular, due to the wide variety of thicknesses, textures, and grain sizes—some almost as fine as flour—available to create gentle dustings or knee-deep drifts. The paper snow comes packaged in bales, which are then blown through a specialized hose that lightly dampens the paper to help it stick to the surfaces it lands on. This technique can cover up to 37 m2 per minute, including structures and trees, Hathaway says.

Best of all, it doesn’t melt.

Update: This article was modified on Jan. 30, 2018 to refresh its information.