During the synthesis, the bacterial reactors tackle a difficult phosphorylation step with ease

A team of researchers has turned Escherichia coli into tiny bioreactors that can manufacture large amounts of psilocybin, the ingredient in magic mushrooms that leads to their psychoactive effects (Metab. Eng. 2019, DOI: 10.1016/j.ymben.2019.09.009). With the compound in clinical trials for treating depression and other brain diseases, says J. Andrew Jones, the Miami University chemical engineer who led the work, scaled-up manufacturing processes may soon be needed to meet consumer demand. Scientists discovered psilocybin decades ago, but the enzymatic pathway that fungi use to make the molecule wasn’t described until 2017. That synthesis, scientists found, starts with a tryptophan-based compound and ends with a phosphorylated product. The phosphate on psilocybin is unstable, however, and in the human body, it’s stripped to make psilocin, which can cross the blood-brain barrier, Jones says. So getting that phosphate onto psilocybin is challenging with synthetic methods, he says, but “biology is good at adding phosphates to things.” Having coaxed E. coli to produce a host of other compounds, he and his team asked whether the simple bacterium could also create this molecule. The researchers genetically modified E. coli to produce enzymes that magic mushrooms use to synthesize psilocybin, including one enzyme that adds the compound’s phosphate group. After optimizing the process, Jones says, they can produce gram-per-liter quantities of psilocybin from their bacterial bioreactor. E. coli doesn’t appear to use psilocybin for anything, he says, so the product remains stable. Jones says the cost of the starting products suggests that his group’s biomanufacturing process would be financially on par with a synthetic process that builds psilocybin from scratch. 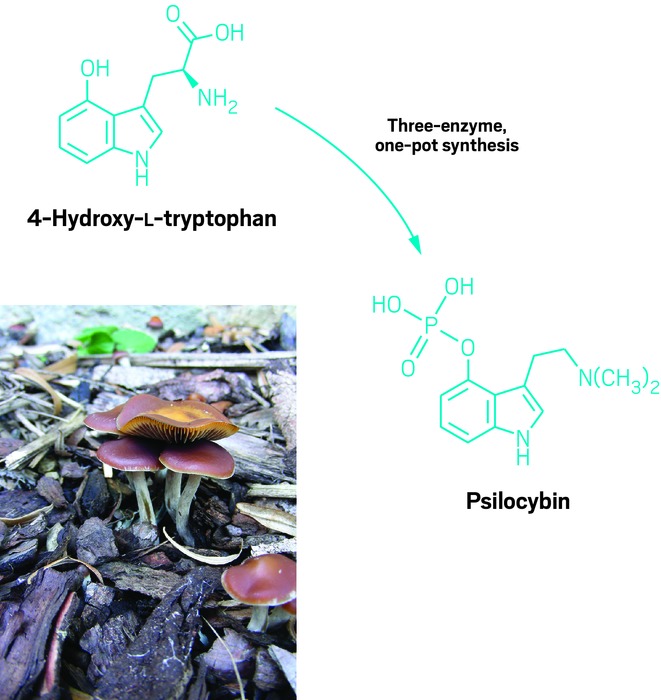 Share X
To send an e-mail to multiple recipients, separate e-mail addresses with a comma, semicolon, or both.
Title: Modified E. coli pump out the magic-mushroom compound psilocybin
Author: Megha Satyanarayana
Chemical & Engineering News will not share your email address with any other person or company.