Microbes both of and out of this world

See you on the dark side of the moon

Credit: NASA
It's in the bag: Astrobiologists are hoping the next moon landing will include a retrieval of the 96 jett bags of human waste left there.

This summer will mark the 50th anniversary of the first time humans set foot on Earth’s only moon. Since then, crewed and uncrewed lunar missions have treated the moon as their own personal landfill, leaving over 181,000 kg of human-made material strewn across its surface. The most notable of those materials is the 96 jettison bags filled with human urine, feces, and vomit. Human made, indeed.

The human gut has around 10 trillion microbes living in it, amounting to about 0.2 kg of those little buggers. Some scientists are hopeful that the microbes in those jett bags, left sealed shut on the moon while being exposed to both high and low temperatures and a harsh radiation environment, may provide valuable information on how life, even in its smallest forms, fares in space.

Andrew Schuerger, who studies the survival of earthly microorganisms in extraterrestrial environments at the University of Florida, is less than optimistic that those bags are still teeming with life. “Most if not all bacteria are likely to be killed within 6–12 years on the lunar surface,” even in its most hidden and protected niches, he tells Newscripts. While he estimates that nothing in those bags, perched unmoving on the lunar surface for over 40 years, has survived, they represent the astrobiological material that can most “easily be collected and returned to Earth by a visiting astronaut in the future.” In other words, if there’s a chance for us to find out what happens to poop in space, those bags are it.

Current theories would point to the microbes perishing long ago, so why are astrobiologists excited? All that junk on the moon, jett bags included, is easy to get to compared with Mars and other planetary bodies. “Thus,” says Schuerger, “most astrobiologists would see the materials around landed spacecraft as excellent samples to search for hardy Earth microbes.” Even if we retrieve those bags and find that everything is dead inside, we’ll still have gained a better understanding of the upper limit of microbial survival in space. And that information is valuable, regardless of whether you believe in extraterrestrial life, as the Newscripts gang does.

Black nail polish might have been edgy in high school, but engineers at Brigham Young University are going through bottles of the stuff at a breakneck pace. Matthew Hamblin and his team of shellac-happy engineers are working toward a faster way of identifying fluorescent tags on bacterial DNA found in the blood of people with bacterial infections. To see that fluorescent glow with the help of lab-on-a-chip devices, which tend to have a complex topography littered with tiny channels, the team needed a way to create an antireflective layer to block out other light while using a laser, thereby avoiding false readings.

The team had tried several other methods to get rid of that glare, but the chip has many complicated layers that are very heat sensitive and can easily be destroyed by applying normal antireflective coatings, Hamblin says. “We ended up using nail polish because we found it was really simple. None of the processes you’d use to deposit it messed up anything else.”

The team used a matte varnish to absorb and scatter the light. That way, the researchers are able to focus their laser to detect fluorescence through the chip’s tiny channel openings.

The nail polish method, which the researchers hope may one day be used in a hospital setting, is ideal in that it is cheap, effective, and flexible. “We used lots of really complicated stuff,” Hamblin says, “and we found that using something really simple worked just fine.” If only everything could be so easy!

Lab Safety
Flying pink objects and an autoclave in your kitchen﻿
Biomaterials
Recycling used gum, and cycling through tattoo-munching cells 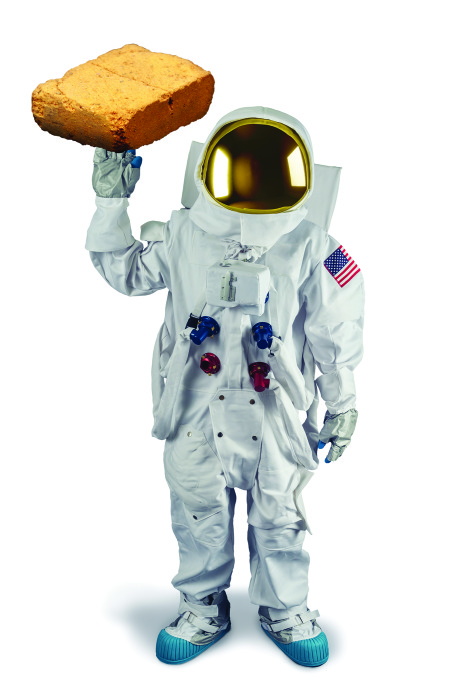 Education
Spacing out with stamps and bricks
Share X
To send an e-mail to multiple recipients, separate e-mail addresses with a comma, semicolon, or both.
Title: Microbes both of and out of this world
Author: Melissa Gilden
Chemical & Engineering News will not share your email address with any other person or company.