This enzyme is what makes stevia so sweet

Scientists have crystallized the structure of the enzyme that adds glucosides to ribaudioside A, one of the main components of the sweetener stevia.

Researchers have crystallized the enzyme that makes the natural product stevia taste 200 times as sweet as sugar. The enzyme is a uridine diphosphate–dependent glucosyltransferase, UGT76G1, and it catalyzes the addition of branched glucosides to compounds in stevia—primarily two diterpenoids called stevioside and rebaudioside A (Proc. Natl. Acad. Sci. U.S.A. 2019, DOI: 10.1073/pnas.1902104116). Without the branched glucosides, says lead researcher Joseph Jez of Washington University in St. Louis, stevia loses its sweetness. To get the crystal structure, Jez’s team bound rebaudioside A to UGT76G1, revealing a catalytic histidine as well as a large cavity that accommodates the growing branched chain. Jez says that the large cavity is unique to this glycosyltransferase: others found in stevia plants seem to add glucosides more linearly. Richard Dixon, a plant biochemist at the University of North Texas who was not involved in the research, says that knowing this structure will help food scientists create better nonsugar sweeteners. For some people, stevia has a bitter aftertaste. Dixon says the organic chemistry needed to build these products from scratch is “herculean.” And although taste scientist Peihua Jiang of the Monell Chemical Senses Center says that it’s likely that multiple parts of the stevia molecule interact with sweet taste buds, Jez says there is some evidence that other trace rebaudiosides in the stevia plant lack the bitter aftertaste. Understanding how the enzyme works could help scale up production of those alternative rebaudiosides and related molecules. 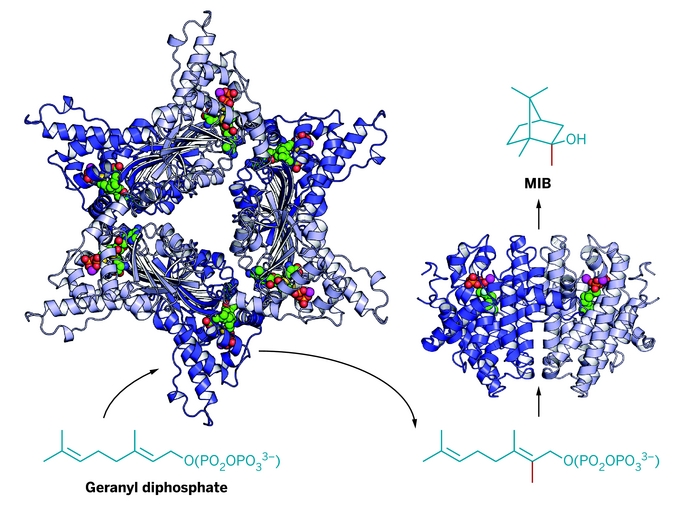 Environment
Putrid Pathway Probed
Share X
To send an e-mail to multiple recipients, separate e-mail addresses with a comma, semicolon, or both.
Title: This enzyme is what makes stevia so sweet
Author: Megha Satyanarayana
Chemical & Engineering News will not share your email address with any other person or company.