Opportunities in academia and industry call chemist from China to the U.S.—and back again

Growing up in the rural suburbs of Chongqing in southwest China, Yun He went to what he describes as a “very poverty-stricken government high school.” Fortunately, the school had a well-trained and passionate chemistry teacher who introduced him to the subject. The year he graduated, only two of 150 graduates gained admission to a university, and He was one. He chose to major in chemistry at Chongqing’s Southwest University, followed by an M.S. at Lanzhou University, where, he recalls, “the living conditions were very substandard.” But he stuck around because the school had one of the top chemistry departments in China. “I loved it; I never skipped a day of school,” he says.

He’s first encounter with the world outside the People’s Republic of China was as a Ph.D. student at the Chinese University of Hong Kong. He was impressed not only by the city’s iconic skyline but also by the extremely well-trained faculty. “They had gone to Harvard and other such schools. To me, it was unimaginable,” he says. Confused by political events in China, he left Hong Kong in 1989 to continue his Ph.D. at Iowa State University. Though he did well, he left before obtaining his Ph.D. to join Abbott Laboratories in Chicago, where the abundance of corporate R&D resources struck him. “They challenged me, but I enjoyed it a lot; I slept in the lab sometimes,” he says about his time at Abbott. He is behind several patents Abbott filed then.

Several years later, He resumed his journey to a Ph.D. at Scripps Research Institute California. The atmosphere was electric, with amazing students and a constant stream of breakthrough research achievements being unveiled, he says. “The focus there was interdisciplinary research in biomedicine,” he recalls. That atmosphere pushed He to work “all the time,” and he obtained his Ph.D. at age 35. “I used to think that I wasted too much time trying to obtain my Ph.D., but now I see that it worked out.”

After graduation, He chose to work at a small biotech firm, Ionis Pharmaceuticals, that was doing “uncommonly innovative” research. Within two years, he was recruited to help build up medicinal chemistry at the Genomics Institute of the Novartis Research Foundation. He also served as president of the San Diego chapter of the Sino-America Biotechnology & Pharmaceutical Professional Association (SABPA), a vantage point that allowed him to closely monitor events in China.

Today Back to China and academia

His experience with SABPA convinced He that China “was about to take off.” Motivated to do his part, He accepted a position as head of medicinal chemistry of Roche’s R&D lab in Shanghai. After two years, he became chief scientific officer of BioDuro, a contract research organization, in Beijing. In 2012, He joined the newly created Innovative Drug Research Center of Chongqing University, where he led efforts to launch the school of pharmaceutical science that he now heads, promoting collaborations with industry and running a few biotech start-ups on the side. Thinking back on his varied life experiences, He says that his guiding principles were to “work hard, be persistent, and constantly expand.” 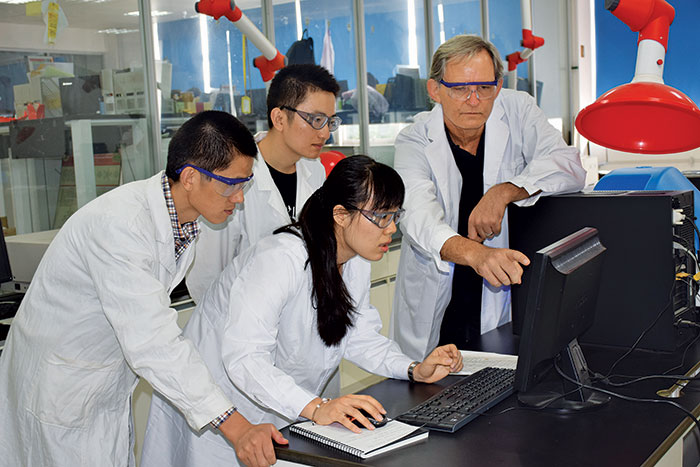 Postdocs
Chinese chemistry Ph.D. grads are forgoing U.S. postdocs
Share X
To send an e-mail to multiple recipients, separate e-mail addresses with a comma, semicolon, or both.
Title: Career Ladder: Yun He
Author: Jean-François Tremblay
Chemical & Engineering News will not share your email address with any other person or company.

Comments
Chandraiah Lagishetti (May 3, 2018 11:17 AM)
Inspiring and motivating leader.
I am pride to be associate with him as a student (PhD research scholar) under his valuable guidance at IDRC, CQU.
Reply »