Diversity in focus at NOBCChE

by Katharine Gammon, special to C&EN

Deidra Ward stood next to her poster on polymer formulations for bioadhesives at the NOBCChE conference and looked up and down the rows of students presenting their work. “It’s definitely a source of inspiration just to be here,” said Ward, a Clemson University junior. “As an undergraduate student, it’s sometimes difficult because you don’t know if this is a path for you. Coming to NOBCChE and seeing people who are doing the job you want, it’s definitely inspiring.”

Ward was one of 740 participants at the annual gathering of NOBCChE (pronounced “no-buh-shay”), the National Organization for the Professional Advancement of Black Chemists & Chemical Engineers, held in September. “I want to be a professor,” said Ward, who hopes to get her doctorate. At the meeting, she met with academics and industry professionals.

Related: Finding the next step at NOBCChE

Darryl Boyd, a chemist in the optical sciences division at the U.S. Naval Research Laboratory and a member of C&EN’s Talented 12 Class of 2018, who chaired the meeting, said one of the key ways that NOBCChE differs from other scientific conferences is the connections made. “I am a product of this meeting,” he said, citing the jobs he found and the academic connections he made at the conference.

The organization launched in 1972, when chemists formed the Ad Hoc Committee for the Professional Advancement of Black Chemists & Chemical Engineers. Annual meetings have been held since 1974. The goal has always been to broaden opportunities for black chemists, Boyd said, but the organization has opened up other opportunities to participate. “NOBCChE is open to everyone, not just people of color and not just chemists,” Boyd said. People who work in all parts of science, technology, engineering, and mathematics (STEM)—including physics, math, and biology—are welcome at the conference, he added.

This year’s theme was “NOBCChE on the Move,” which Boyd explained was a nod to the interdisciplinary nature of science today; chemistry is increasingly interwoven into all science.

The organization’s biggest prize—the Percy L. Julian Award—this year went to Bobby Wilson, an environmental chemist who rose to become the president of Texas Southern University in 2006 and 2007 and was the chairman of NOBCChE’s board from 2005 to 2014. “The only thing separating you from success is just a little hard work,” Wilson told the crowd gathered for the awards luncheon.

Related: Students buzz in for chemistry at NOBCChE 2018

Hard work and determination has to match up with networking and opportunities for chemists to develop professionally. Last year, Treva Brown attended NOBCChE as she was finishing up her dissertation involving atomic force microscopy. She had just gotten a job offer from the U.S. Naval Research Laboratory. Now she’s in a position to encourage others who are finding their paths through the world of chemistry at all stages of learning—from high school to early career. “This is the only meeting where you get to see and hear from other scientists and engineers who look like you,” she explained. “For many of us, we don’t get that at work. For me personally, I am the only African American female scientist in my area.”

Talitha Washington, a professor of mathematics at Howard University, has also been the only black woman in her department throughout most of her career. Washington spoke to NOBCChE attendees about how to be unhidden in their work, a reference to the movie “Hidden Figures,” which showcased the contributions of black female mathematicians at the National Aeronautics & Space Administration.

The advice she laid out for others was based on her experience as a black female professor in a STEM field who raised three children while establishing herself in academia. “Recognize that racism permeates the scientific fields,” she told the group. “Undertake difficult conversations cautiously, not assuming people are evil creatures.”

Renã Robinson, a bioanalytical chemist at Vanderbilt University and a member of C&EN’s Talented 12 Class of 2016, focused her talk on building a successful research program. “I think about running my lab like a company, and I aspire to be a CEO,” she told a group of scientists and students. “Just like a CEO, you’re responsible for bringing in the money, bringing in the right team, keeping the vision of the research going, doing marketing and branding, and communicating with others in your field.”

She led the audience in analyzing their limiting beliefs (for example, there are so few positions available at research universities) and replacing them with an abundance mind-set (there are plenty of jobs, and why not me?). Robinson also counseled the attendees on creating their own best environment at work by setting a culture that works for them.

NOBCChE is an opportunity to have your entire self accepted, explained Emanuel Waddell, associate dean of the College of Science and professor of chemistry at the University of Alabama, Huntsville, and president of the organization. “Chemistry is what binds all of us together, but NOBCChE fully embraces the challenges of race and gender, the balancing of professional and personal lives, the need of scientists to be uplifted to overcome challenges and overcome stumbles on the path to success.”

Waddell’s biography exemplifies the impact of networking and mentorship in the organization. He first attended the conference in 1996, when the meeting was held in Detroit—and it changed the course of his life. “I was a third-year graduate student in a doctoral program, and my adviser told me that I should not pursue a doctorate,” he explained. This suggestion was made even though he had passed his coursework and cumulative examinations.

NOBCChE is open to everyone, not just people of color and not just chemists.
Darryl Boyd, research chemist, U.S. Naval Research Laboratory

While at that Detroit meeting, he found a welcoming group of students from Louisiana State University and decided to make a change. “As a result of attending that conference, I enrolled at LSU under an extremely supportive adviser, Steve Soper,” he said. At a later conference, he learned of postdoctoral opportunities at the National Institute of Standards & Technology. After getting a fellowship there, he collaborated with another NOBCChE member. That experience ultimately led to his first academic position.

Developing and maintaining professional relationships can be the key to moving up the work ladder. Stefan France and Keith Oden, both at Georgia Institute of Technology, led a session on developing and maintaining relationships through a scientist’s career. They explained the difference between networking, which can feel shallow and forced and often happens in short bursts, and connecting, which is lower stakes, casual, and authentic and can unfold over a longer period. They led people through an exercise to craft a short, elevator-style pitch about themselves and also offered ways to politely enter and exit a conversation.

For chemists who don’t fit the mold of the typical scientist, connecting on the job is crucial. “If you’re in STEM and you’re a person of color or a woman, you’re going to be the other,” France said. “You get that feeling when you come in the door; everyone turns around.” He added that learning ways to authentically connect with people can flip the script. Once people get to know one another, they realize that “people are people.”

Ward, the Clemson junior presenting her poster, hopes the meeting will bring the same kinds of opportunities to her. During NOBCChE’s career fair, she spoke with several departments she was interested in—and it’s made her even more optimistic about a future path in chemistry. As she listened to Wilson discuss his life story during the Percy L. Julian Award luncheon, she turned to her Clemson classmate: “I want to be able to do what he’s done.”

The 2019 NOBCChE national conference will be held in St. Louis. The tentative dates are Nov. 18–21.

Katharine Gammon is a freelance science writer based in Santa Monica, Calif.

The headline on this story was altered on Nov. 5, 2018, so that it better reflects the headline that ran in our print magazine. 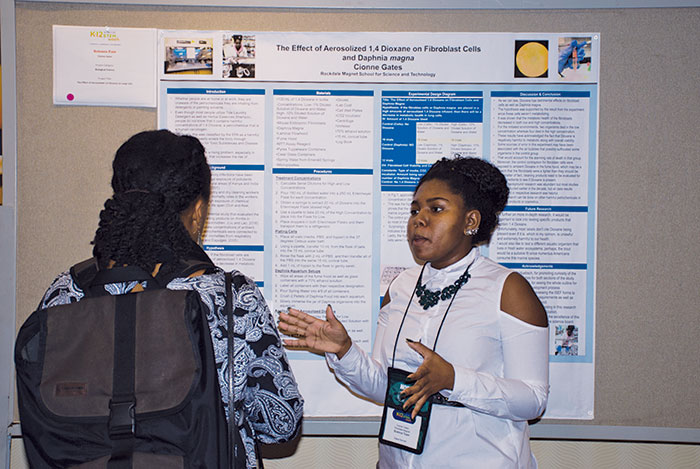 Careers
Finding the next step at NOBCChE 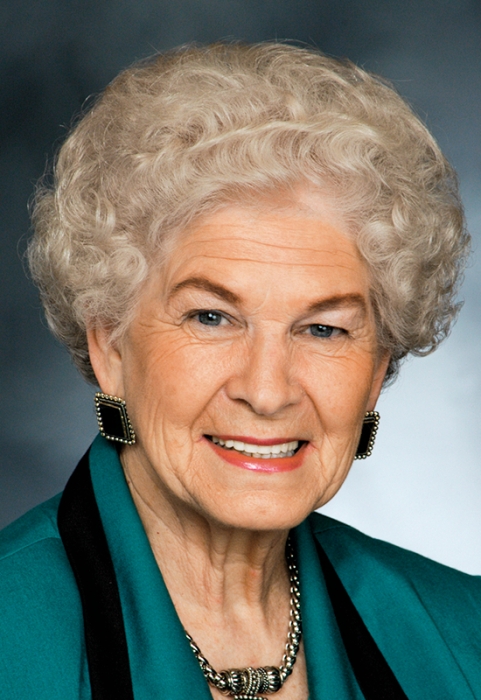 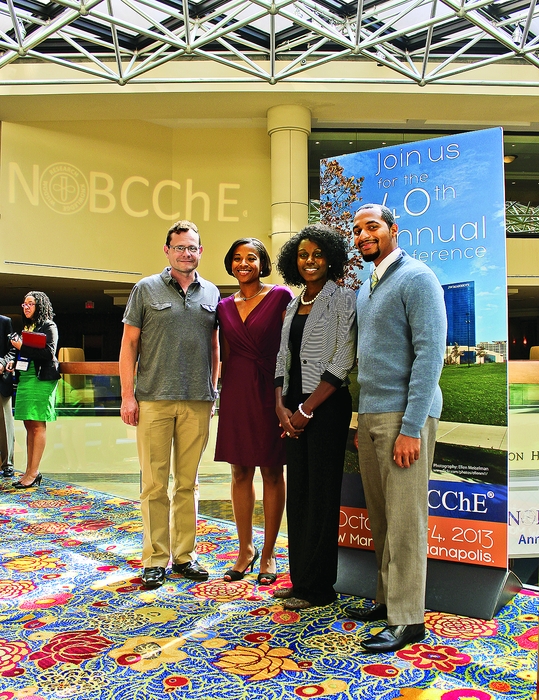 Careers
LOCAL CHAPTERS
Share X
To send an e-mail to multiple recipients, separate e-mail addresses with a comma, semicolon, or both.
Title: Diversity in focus at NOBCChE
Author: Katharine Gammon, special to C&EN
Chemical & Engineering News will not share your email address with any other person or company.