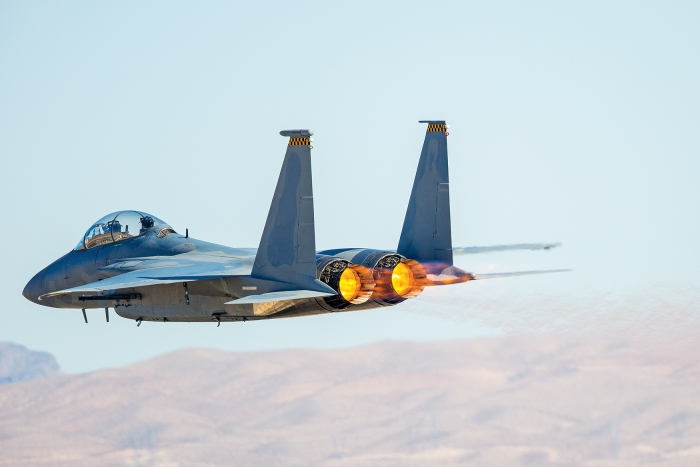 Credit: iStock
The F-15E military jet’s light weight depends on aluminum, which must be treated with corrosion-protecting compounds to make it durable.

On Aug. 5, 1981, a Boeing 737 took off from Taiwan’s Taipei Songshan Airport with 110 people on board. Fourteen minutes after leaving the ground, the aircraft suffered an explosive decompression and disintegrated. No one survived.

Investigators attributed the event in large part to extensive corrosion damage in the lower fuselage. More recently, the 2014 crash of a 28-year-old F-15 fighter jet in Virginia was blamed in part on corrosion.

Such failures, thankfully rare, underscore the danger of corrosion in aircraft and the importance of corrosion-protecting surface treatments.

However, bans on the aerospace industry’s main weapon against corrosion, compounds based on hexavalent chromium, is looming in Europe. Treatment formulators and paint makers are scrambling to find effective substitutes, but executives say the effort is a challenge.

Plating chemical makers such as Coventya, Luster-On, and SurTec and paint makers such as PPG Industries and AkzoNobel have known for some time that the bans were coming. In 2013, the European Union placed a number of hexavalent chromium compounds on a list of substances of very high concern, classifying them as carcinogenic and mutagenic.

As a result, under Europe’s Registration, Evaluation, Authorisation & Restriction of Chemicals (REACH) regulations, chrome-plating chemicals such as sodium dichromate may no longer be used after Sept. 21 of this year. Corrosion-resisting paint additives, such as strontium chromate, have a sunset date in January 2019.

In addition, the U.S. Occupational Safety & Health Administration recognizes Cr(VI) as carcinogenic. The severe restrictions the agency places on worker exposure to vapors from chrome-plating baths and dust from chromium spray paints are also forcing a shift to alternatives in the U.S.

So industry groups have applied to the European Chemicals Agency for extensions to use hexavalent compounds for critical applications beyond their sunset dates. The agency has approved Cr(VI) plating treatments for aerospace use through 2024 and some Cr(VI) additives for aerospace paints through 2026.

But the agency’s decision must be approved by the European Commission, Durkin points out, and that hasn’t happened yet. In addition, the seven-year extensions could be abrogated if acceptable Cr(VI)-free alternatives are developed, he says.

Coventya has been working on plating alternatives, mostly based on the less hazardous trivalent form of chromium. Cr(III)-based substitutes, many for decorative and other less critical uses, have been on the radar since 2012, when it became clear that European authorities planned to ban Cr(VI) compounds, Durkin says. But it has been particularly difficult to get equivalent performance using Cr(III), he notes, especially for chrome-plating used in heavy-wear applications such as on landing gear.

One electroplating method based on trivalent chromium uses varying electrical pulses instead of a steady current. Jennings Taylor, founder of Faraday Technologies, developed the technique in 2004 and won a Presidential Green Chemistry Award for it in 2013. He says the process is still not commercial.

Taylor is working with Coventya on a Cr(III) formulation that would match the wear profile and microstructure of a Cr(VI) finish. Once that is done, he expects a long qualification process before it is adapted for aerospace use.

Luster-On, a supplier of plating chemicals, has also developed Cr(III) alternatives that in most cases replace the more hazardous standard materials. But trivalent chromium is not a perfect replacement.

“Hexavalent chromium outperforms the trivalent species in cost and performance,” says Joe Ciejka, vice president of development and technology for Luster-On. “The performance issue is an important consideration for aerospace components, which have to last between 20 and 40 years.”

Some of Luster-On’s surface treatment technology is based on patents licensed from the U.S. Navy. The Navy developed its own Cr(III) recipes because it needed to protect maintenance personnel and wasn’t satisfied with existing trivalent technology.

“Our formulas give excellent adhesion and corrosion protection on aluminum and aluminum alloys,” says Craig Matzdorf, a senior materials engineer in the Naval Air Systems Command and primary inventor on the Navy’s seven U.S. patents. Other formulations, such as those based on rare earths and magnesium, did not perform to the Navy’s standards, he says.

The plating specialist SurTec is another licensee of the Navy’s Cr(III) surface treatment patents. “Most of our customers have made the shift to trivalent-based formulations,” says Dieter Aichert, the firm’s global sales director. “We ourselves shifted to supplying trivalent-based chemicals. For us and for our customers it’s a way of assuring the health and safety of workers.”

However, for Cr(VI)-based coatings, such as for plane exteriors, the effort to shift technology is much less advanced. The Navy has developed Cr(III)-treated aluminum particles to replace hexavalent chromium in epoxy primers. The Navy’s “active aluminum-rich primer” system “is equivalent to Cr(VI) systems in some cases, in some it is not, and in other cases it’s better,” Matzdorf says.

The aluminum-rich technology isn’t commercial yet, though Matzdorf says the Navy is working with six licensees. Meanwhile, paint makers have been developing their own alternative corrosion-inhibiting primers and paints.

AkzoNobel, for instance, has patented lithium-based corrosion inhibition technology for exterior aerospace primers and coatings, and some customers are now using them, the firm says. For structural applications, Akzo says customers still rely on Cr(VI), though the firm is developing alternatives.

In the Aerocron system, components are dipped in a treatment tank and then cured in an oven, providing uniform coverage, even to complex parts. That’s an advantage over Cr(VI)-based spray primers that are hand applied, Arbab notes. The Aerocron system also does not pose any of the health hazards associated with hexavalent chromium, he says.

PPG and other players in the aerospace coatings sector know they have their work cut out for them. “There are a lot of barriers to replacing hexavalent chromium, and the longer something has been around, the harder it is to change,” the Navy’s Matzdorf says. But because of the hazards hexavalent chromium use poses, he says change “is part of our job.”

Business
Polyurethane makers prepare for a phase out
Business
High-Performance Isocyanate Paint Ingredients Come Under Scrutiny
Business
Giving Marine Life The Slip
Share X
To send an e-mail to multiple recipients, separate e-mail addresses with a comma, semicolon, or both.
Title: Confronting the looming hexavalent chromium ban
Author: Marc S. Reisch
Chemical & Engineering News will not share your email address with any other person or company.