Neanderthal as hypercarnivore: It's a bit absurd to envision. 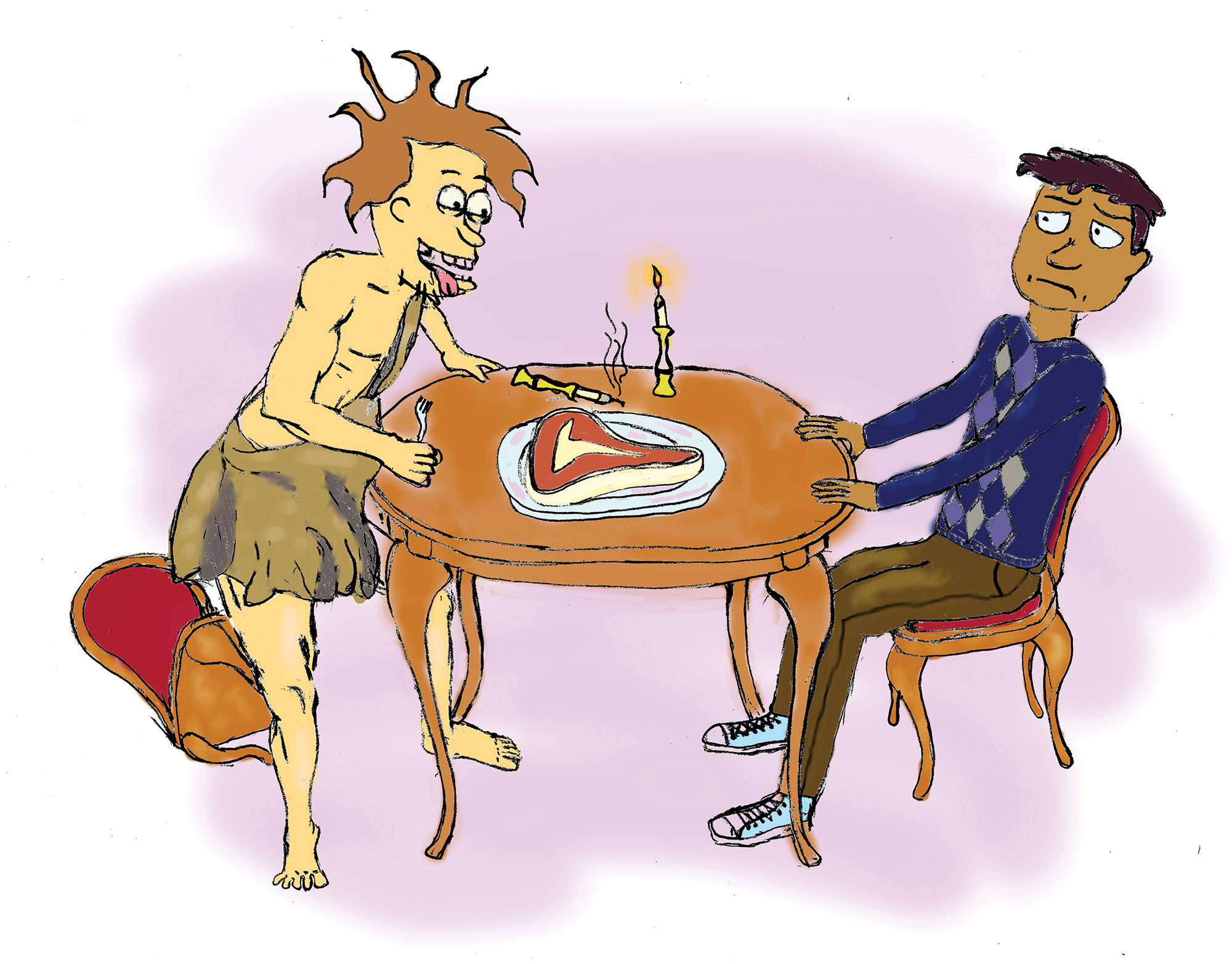 Distaste for steak: He'll have the salad.

Many twentysomethings who follow a meat-heavy, low-carb paleo diet presume they’re re-creating the eating patterns of our hunter-gatherer ancestors. Presumption, however, is of little value to Kimberly Foecke. An anthropology graduate student at the George Washington University (GW), she instead is trying to reconstruct the diet that Neanderthals actually ate, and part of that involves a whole lot of rotten meat.

Studies on Neanderthals present a paradox: Neanderthals’ fossils are high in nitrogen-15 relative to nitrogen-14 compared with other animals, which implies that their diet was closer to that of hypercarnivores, like hyenas and coyotes, which eat almost entirely meat, than to that of humans. But “this doesn’t make sense from the point of view of human nutrition because if you are a hypercarnivore, you starve from an imbalanced diet,” says Alison Brooks, Foecke’s research adviser. Further, recent work on Neanderthals’ dental buildup show remnants of starchy plants.

To reconcile the isotopic ratios, nutritional knowledge, and plant remnants, Foecke is investigating whether a diet rich in rotten meat might have led to higher 15N levels than a fresh-meat diet would have. “If you come across a carcass that’s even a little bit edible, you’re not going to pass up a chance to get some food,” Foecke tells Newscripts. “So it’s not completely out of the realm of possibility that someone who’s starving would consume rotting meat.”

To test her hypothesis, Foecke diligently hacks up beef in the basement of GW’s Science and Engineering Hall, and then in a Smithsonian Institution lab, she watches it putrefy. At various points in the meat’s decay, she analyzes its isotopic ratios using mass spectrometry.

So far, peeping in on putrefaction appears to be paying off. Foecke says she’s found an increase in 15N:14N ratios of about 1 part per thousand a week after decay. For comparison, the difference between an herbivore’s and a carnivore’s ratios is about 3 parts per thousand.

Despite the promising results, fouling foodstuffs is hard work for Foecke, who came to Brooks’s lab with a background in geochemistry. She’s had to learn a slew of new lab techniques, not least of which was stifling the smell of spoiled meat before it reaches her lab mates.

Foecke says handling a bunch of moldy meat hasn’t made her any more squeamish around hamburgers. The same cannot be said about almost one-third of the participants in a recent study.

As many who’ve gone vegetarian will point out, meat eating comes with a higher risk of cardiovascular disease and diabetes, and raising cows requires higher water consumption and generates significantly more greenhouse gas emissions than does growing many vegetables. But herbivorous humans who have a beef with excessive meat eating will find only a lean body of research on how best to curb the cravings of their carnivorous comrades.

That’s why a team led by Catherine Amiot and Antony Karelis at Université du Québec à Montréal aimed to test the effectiveness of several techniques for getting people to reduce their meat consumption (PLOS One 2018, DOI: 10.1371/journal.pone.0204590). A group of young men—one of the age-gender groups that consume the most meat—was exposed to a multifaceted intervention, including a “mind attribution” component, in which subjects wrote about a “cow’s inner thoughts, feelings, intentions, and emotions,” and an “appeal to fear” component, in which subjects watched videos created by People for the Ethical Treatment of Animals showing, for example, the conditions that animals are raised in and arguing they’re inhumane.

Getting to the meat of the matter, it appears you can be scared meatless: at the end of the 4-week intervention and monitoring period, 31% of meat eaters were self-identifying as flexitarians, who consume meat only occasionally. And subjects voted the appeal to fear as the second most effective strategy, after a component in which subjects were told about meat-related health effects, the environment, and animal welfare.

Food Science
Scientific surprises from spinach and champagne
Pollution
Estimating human microplastic consumption
Microbiome
Baby poop may hold a secret to food allergies
Share X
To send an e-mail to multiple recipients, separate e-mail addresses with a comma, semicolon, or both.
Title: Reconstructing the caveman diet and converting carnivores
Author: Manny I. Fox Morone
Chemical & Engineering News will not share your email address with any other person or company.