Compound protects mice from lethal forms of influenza. Chemists could use a similar design approach to target other viruses.

Taking inspiration from flu-fighting antibodies, scientists have developed a small molecule that stops the influenza virus from fusing with cells in the respiratory tract, thereby preventing infection in mice. Unlike vaccines, which typically have to be injected, the compound could be swallowed, possibly in pill form. The strategy the researchers used to develop the small molecule could lead to a new class of drugs designed to mimic virus-targeting antibodies.

To design the new molecule, the scientists, led by Maria J.P. van Dongen of Janssen and Ian A. Wilson of Scripps Research’s California campus, used broadly neutralizing antibodies that target the stem of influenza’s hemagglutinin as their template. Hemagglutinin is the protein on the influenza virus’s surface that helps the virus fuse to cells to infect them. It’s the H when doctors refer to the H1N1 strain of the flu. Hemagglutinins stick out of the influenza virus like pins in a pin cushion. Although the top of the hemagglutinin pin changes frequently—which is part of the reason there’s a new flu vaccine every year—the stem of the pin doesn’t change much.

Scientists have been working on therapies based on broadly neutralizing antibodies, which prevent hemagglutinin’s stem from making the conformational changes that are required for the virus to fuse to cells. Wilson and van Dongen reasoned they could use a small molecule to do the same thing. “This particular site on the hemagglutinin is not a deep pocket that is often the target for small molecule ligands,” Wilson points out. “It is a series of small pockets.”

Wilson and van Dongen’s team screened a library of about 500,000 small molecules to see which ones were best at displacing a small protein, which was designed to mimic broadly neutralizing hemagglutinin antibodies, from the flu protein’s stem. They took the most promising compounds and used information they’d gleaned from the crystal structure of the hemagglutinin stem protein and from pharmacokinetic profiling to come up with the lead compound JNJ4796 (Science 2019, DOI: 10.1126/science.aar6221).

Mice could fight off infection when exposed to 25 times the lethal dose of influenza the day after ingesting JNJ4796. The researchers say they need to do more tests to see how long the compound lasts prophylactically or if the compound works if given after infection.

“In principle, a number of viruses could be targeted using this approach,” van Dongen says. “In this case, we were targeting the fusion activity of the virus.” Other viruses that operate using fusion proteins are HIV, hepatitis C virus, Ebola viruses, coronaviruses, and RSV.

“This work is exciting for two reasons,” says Jesse Bloom, an expert in influenza evolution at Fred Hutchinson Cancer Research Center. “It describes a general strategy to use antibodies to help inform the design of drugs, and it identifies a specific new drug candidate for influenza virus.” Although antibodies are becoming increasingly common as therapeutics, he says, small molecules are still easier to make, store, and administer. And the idea of using small molecules to block hemagglutinin fusion is a new approach for designing flu-fighting drugs, Bloom adds. “In conjunction with the growing arsenal of drugs against the virus’s polymerase, this greatly expands the ways that we can target influenza virus with small molecules.” 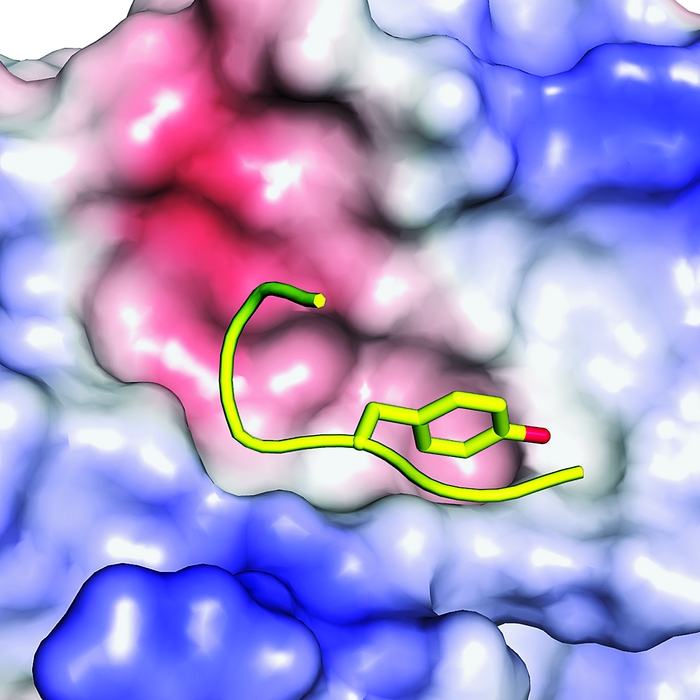 Share X
To send an e-mail to multiple recipients, separate e-mail addresses with a comma, semicolon, or both.
Title: Small molecule mimics flu-blocking antibodies
Author: Bethany Halford﻿
Chemical & Engineering News will not share your email address with any other person or company.