The European Chemicals Agency (ECHA) says it intends to quadruple the number of checks it undertakes on the registrations of thousands of chemical substances used in the bloc. The move is part of an effort to improve compliance with the EU’s Registration, Evaluation, Authorisation and Restriction of Chemicals (REACH) legislation. ECHA also intends to streamline its systems for checking registrations, improve law enforcement, and clarify information requirements for industry, says Ofelia Bercaru, head of dossier evaluation at ECHA.

ECHA is proposing a series of measures to remedy the situation. 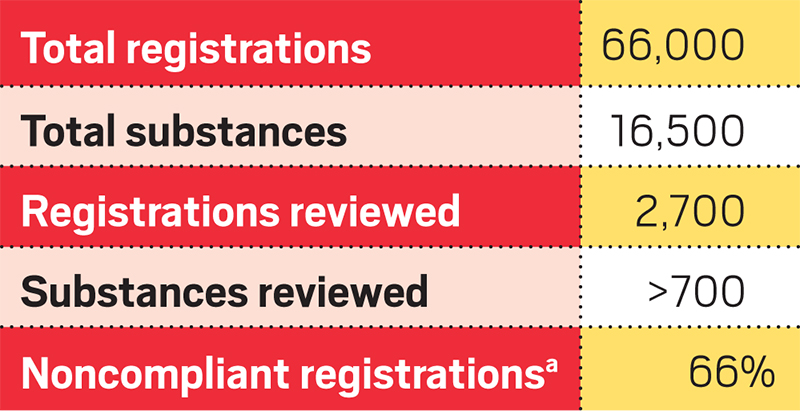 Source: European Chemicals Agency.
Note: Data are from 2008 to 2018. a Registrations are of those reviewed.

ECHA’s planned policy shift comes within a few weeks of the publication of a report by the European Environment Bureau (EEB), a collection of more than 150 environmental organizations across Europe, in which the EEB claims there is widespread breaking of chemical safety law and lax official enforcement. A study by BUND, a German environmental group and member of the EEB, completed in April and cited in the EEB’s report, asserts that five of the world’s largest chemical companies are among 654 firms that are failing to comply with REACH.

ECHA has sat on this problem for years. We see the agency moving in the right direction, but why all the secrecy?
Tatiana Santos,﻿ EEB Chemicals Policy Manager

The EEB is calling for increased transparency of information associated with REACH registrations, along with the imposition of tougher sanctions, including fines and the naming and shaming of noncompliant companies, without delay. “ECHA has sat on this problem for years. We see the agency moving in the right direction, but why all the secrecy?” says EEB Chemicals Policy Manager Tatiana Santos.

CEFIC, Europe’s largest chemical industry association, says it will do what it takes to remedy the situation. “We take ECHA’s findings—that the quality of data in a number of REACH dossiers needs improvement—seriously,” says Marco Mensink, director general for CEFIC.

Share X
To send an e-mail to multiple recipients, separate e-mail addresses with a comma, semicolon, or both.
Title: EU to quadruple REACH compliance checks
Author: Alex Scott
Chemical & Engineering News will not share your email address with any other person or company.