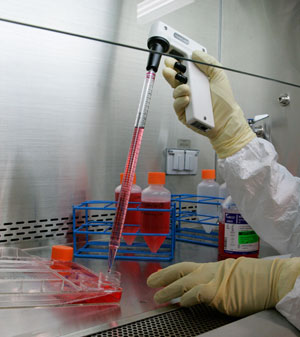 THE FOOD & DRUG Administration has given Geron, a small California-based biotech company, the green light to inject living cells manufactured from human embryonic stem cells into a handful of patients with spinal cord injuries.

The trials, set to begin this summer, will be the first in the world to test the safety of a therapy derived from human embryonic stem cells in people.

A lot of hope is riding on the outcome of the trials. If the product, called GRNOPC1, proves safe, it could open the door for other embryonic-stem-cell-based therapies to treat conditions such as juvenile diabetes, cancer, multiple sclerosis, and stroke, experts say.

FDA's decision "marks the dawn of a new era in medical therapeutics," Thomas B. Okarma, president and CEO of Geron, said during a briefing. GRNOPC1 is intended to "permanently reverse disease pathology, not merely to temporarily relieve symptoms," he noted.

The therapy involves the use of growth factors that turn embryonic stem cells into oligodendrocyte precursor cells. Those precursor cells have been shown to repair myelin, or insulation, around nerve cells and to stimulate nerve fibers of laboratory animals with spinal cord injuries, thereby leading to restoration of function, Okarma said.

Geron's announcement marks a new chapter in the history of embryonic stem cell research, which has been fraught with controversy over how the cells are derived. Scientists have also disagreed over how to create highly purified products from cells that can turn into any type of human cell, says Michael D. West, founder of Geron and CEO of BioTime.

But some critics say it is premature to test embryonic-stem-cell-based therapies in humans. "I think this decision plays on the desperateness of people with spinal cord injuries. It's pretty hard looking at the rat research to say this is going to be a slam dunk," says Jaydee Hanson, policy director of the nonprofit International Center for Technology Assessment.

FDA's approval comes as proponents of this area of research are eagerly awaiting the Obama Administration's promised repeal of the current limitation on federal funding for human embryonic stem cell research.