U.S. chemical producers are wobbling a little after an oil price decline but are still on their feet 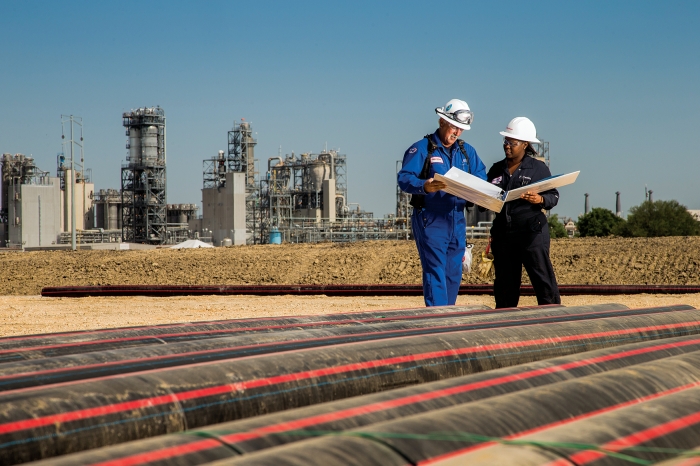 U.S. producers still maintain a competitive edge over their foreign rivals. Profits have dropped from obscene to only very high. And although some companies talk about delaying multi-billion-dollar petrochemical projects, the next four years should still see more U.S. plants get built than in a generation.

For the past five years, U.S. chemical companies have enjoyed an enormous advantage because of a glut of natural gas extracted from shale. Most U.S. petrochemical production uses gas-derived ethane, propane, and butane—known collectively as natural gas liquids—as feedstocks for cracker complexes that make the basic petrochemical building block ethylene.

▸ Chevron Phillips’s $6 billion project to build an ethylene cracker in Baytown and two polyethylene plants in Old Ocean was the first new project announced in the U.S. since the early 2000s. Construction began last year.

Dow Chemical
Freeport, Texas
Start-up: 2017
▸ Dow began construction on an ethylene cracker at its flagship site in Texas last summer. A propane dehydrogenation plant is more than 50% complete and is expected to start up this year.

Occidental Chemical/Mexichem
Ingleside, Texas
Start-up: 2017
▸ Construction is under way on the project, which entails a small cracker that will back-integrate OxyChem’s vinyl chloride operations. Mexichem will buy the vinyl chloride.

Sasol
Lake Charles, La.
Start-up: 2018
▸ The South African firm decided last October to move forward with an $8 billion ethylene and derivatives project. However, the company has delayed a final go-ahead on a much larger gas-to-liquid fuels project as it evaluates volatile energy economics.

Shell Chemical
Monaca, Pa.
Start-up: Not determined
▸ Shell announced plans to build an ethylene cracker in Appalachia in 2011. Little project activity has occurred since then. Last year, Shell exercised an option to buy the site in Monaca. It also canceled a gas-to-liquids project in Louisiana.

Shintech
Plaquemine, La.
Start-up: Not determined
▸ The U.S. arm of Japan’s Shin-Etsu Chemical filed for permits last year with the Louisiana Department of Environmental Quality for a small cracker to back-integrate its polyvinyl chloride operations.

Axiall/Lotte Chemical
Louisiana
Start-up: 2018
▸ Axiall and its South Korean partner have completed front-end engineering and design work on a new cracker. However, Axiall said last month that it is delaying a final decision because of rising construction costs in the chemical industry.

Badlands NGL
North Dakota
Start-up: 2017
▸ Unveiled last fall, the $4 billion plan is the most recent cracker announcement. The project, which would take in by-product ethane from oil fields, faces an uphill climb because of its offbeat location and lack of big-company backing.

Odebrecht/Braskem
Parkersburg, W.Va.
Start-up: Not determined
▸ Braskem’s parent company, the Brazilian conglomerate Odebrecht, unveiled its intention in 2013 to build an ethylene cracker and three polyethylene plants. However, earlier this year, the company said it is reconsidering because of slipping oil prices.

Total
Port Arthur, Texas
Start-up: Not determined
▸ After completing an upgrade to its Port Arthur ethylene cracker joint venture in 2013, Total said it was studying a new cracker at the site.

Competitors in Europe, Asia, and Latin America mostly crack petroleum-derived liquids such as naphtha. Hydraulic fracturing and horizontal drilling technologies have unlocked massive amounts of natural gas from the ground in the U.S., allowing firms to make ethylene at a fraction of the cost of the other regions.

Last June, however, oil prices started to fall because of global oversupply, much of it attributable to the application of the new drilling techniques to extract more oil. Prices are now about half of what they were at their peak, providing some relief to foreign competitors.

Natural gas prices have fallen too but not by as much. Last summer, oil was four times as expensive as natural gas on an energy content basis. Now, it is three times as much—still a robust advantage for U.S. chemical producers to enjoy.

In addition to cheaper natural gas, other factors are mitigating the oil price decline to the benefit of U.S. chemical producers, explains Stephen Lewandowski, director of olefins for the consulting group IHS Chemical.

For instance, the price of ethane, the main ethylene feedstock, has dipped below that of natural gas on an energy content basis. As Lewandowski explains, ethane is extracted from natural gas along with other natural gas liquids. When ethane is in oversupply, it is reinjected into the natural gas stream. However, because there are limits to how much ethane is allowed in gas pipelines, processors often have no choice but to sell it to chemical makers at a loss.

On top of that, shale has led to a glut of propane and butane too, making them at times even cheaper to run through chemical plants than ethane.

Mauro Gregorio, Dow Chemical’s president of feedstocks and energy, says his company monitors feedstock prices on a weekly basis and can adjust its production just as fast. “We went several weeks in a row in the fourth quarter and the beginning of the first quarter when propane was advantaged,” he says. “Right now, butane is taking the lead.”

Naushad Jamani, senior vice president of olefins and feedstocks for Nova Chemicals, is not worried about oil. He says prices would have to drop to $30 per barrel for oil and natural gas to reach parity. “Natural gas liquids will continue to remain the preferred feedstock for North America,” he says.

Although they are still competitive relative to the rest of the globe, U.S. chemical companies have been socked in the pocketbook by lower oil prices. As oil prices have tumbled, so have global prices for chemical products. Ethylene sold for 70 cents per lb last October, Lewandowski says. It is now about 35 cents.

A year ago, chemical companies made 45 to 50 cents on every pound of ethylene they produced. “Those that were running were definitely printing cash,” Lewandowski says. Now, profits are about 25 cents per lb, a level, he says, that is still historically quite high.

Nova’s Jamani agrees: “If somebody told us we would be earning these kinds of margins 10 years ago, we would have been thrilled.”

Thrilling profits have encouraged scores of chemical companies to invest in North America. According to the latest numbers from chemical manufacturers trade group the American Chemistry Council, 223 shale-related chemical projects have been announced in the U.S., amounting to $137 billion in planned investment. A dozen companies have announced new ethylene crackers. Five are already under construction and are slated to begin production in 2017.

The simultaneous construction of these large projects is straining the labor and equipment markets. Costs are escalating. For instance, when Sasol approved plans to build a cracker and derivatives complex in Lake Charles, La., last year, the company estimated the cost at $8.1 billion. In 2011, Sasol figured the investment wouldn’t be more than $4.5 billion.

Cost escalations and the volatile price environment have sent some project proposals teetering.

For example, last month, Paul D. Carrico, chief executive officer of Axiall, cast doubt on a $3 billion ethylene cracker complex his company is planning with South Korea’s Lotte Chemical. The partners had completed front-end engineering for the Louisiana plant and were planning a go-ahead decision this quarter.

However, on a conference call with stock analysts, Carrico observed that the construction market would soon be “going gangbusters.” At the same time, he noted, ethylene profits aren’t as good as they once were. “Both partners have agreed and decided to move the cracker decision beyond the first quarter to allow time for some additional analysis,” he said. When asked whether he might not move forward with the project, he noted, “That’s always an option.”

Braskem, which is planning a cracker in West Virginia with its parent company, the Brazilian conglomerate Odebrecht, recently indicated it is reevaluating its plans because of energy markets.

“We never believed that it was possible for all of those projects to be built,” says Dow’s Gregorio, who’s confident about his own company’s plans. Dow is set to complete a propane dehydrogenation plant in Freeport, Texas, later this year. Its new cracker at the site, already under construction, is expected to be ready in the first half of 2017 and may be the first new cracker of its generation to come on-line.

Until then, Gregorio says, market conditions will only get better. Operating rates for plants making the most important ethylene derivative, polyethylene, are already nearly 90% and have nowhere to go but up until the new U.S. production hits the market.

Demand for chemicals has been strong, and industry executives contend that lower oil prices will make it even stronger. “With oil prices dropping from the $100 level to the $50 level, a significant amount of money has basically shifted from oil producers to a very wide range of consumers globally,” Nova’s Jamani says. “That is bound to show up somewhere in terms of increased demand.”

In the long run, there are plenty of incentives to build new ethylene capacity in North America, Lewandowski says. The world needs 6 million additional tons—or about four big crackers’ worth—of ethylene every year, he notes.

The Middle East and Asia aren’t adding capacity like they did 10 years ago. No one is contemplating more capacity in Europe. “If we don’t add here,” Lewandowski asks, “who’s going to add?”

Petrochemicals
US petrochemicals to hit a feedstock rut
Business
Chemical makers prime the feedstock pump
Business
Can U.S. petrochemical makers stay on top?
Share X
To send an e-mail to multiple recipients, separate e-mail addresses with a comma, semicolon, or both.
Title: Chemical Producers Still Standing After Oil Price Drop
Author: Alexander H. Tullo
Chemical & Engineering News will not share your email address with any other person or company.