What’s gluten-reduced beer, and can celiac patients drink it?

[+]Enlarge
Credit: Will Ludwig/C&EN
Those with celiac disease have more choices than ever in the beer aisle. 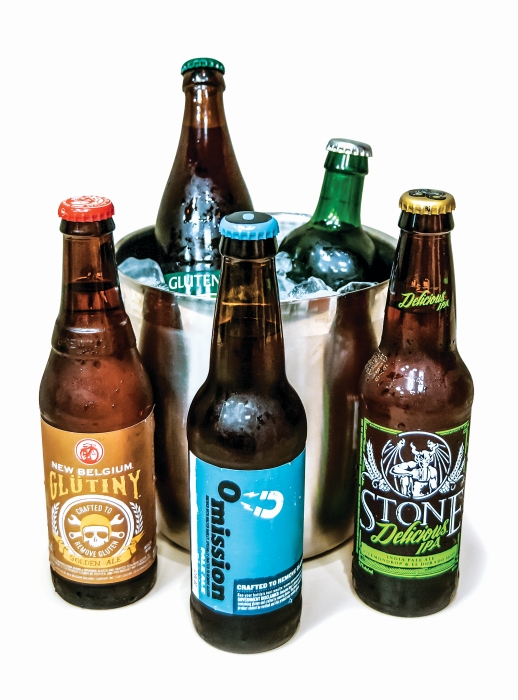 Credit: Will Ludwig/C&EN
Those with celiac disease have more choices than ever in the beer aisle.

Beers have started to appear in liquor stores worldwide with new labels advertising “gluten-free” and “gluten-reduced.” But this niche isn’t just a callow bow to foodie trends. It’s a clever exploit of established science.

Gluten is an aggregate of certain proteins found in wheat, barley, and rye. Those with celiac disease worry about gluten because their bodies mount an aggressive immune response to some gluten proteins, damaging the small intestine in the process and leading to a host of problematic symptoms.

The condition, though serious, affects only about 0.8% of the U.S. population and can be diagnosed by a blood test. Nonetheless, gluten has become the latest nutritional bogeyman given claims that it can affect the health of people without celiac disease. As a result, food manufacturers have rushed to get gluten-free versions of their products on shelves.

So the appearance of beer without gluten isn’t surprising. One way for a brewer to eliminate gluten—and the only way that earns a “gluten-free” tag on the bottle—is to brew using grains that don’t contain gluten. Sorghum beer has been around for a while, but it has a molasses taste that’s odd to a palate accustomed to normal barley- and wheat-based beers. Rice and millet also work as a basis for brewing but can be more challenging to source and brew with, says Brewmaster Joe Casey of Omission Beer.

Enter Brewers Clarex. This commercially available enzyme—originally found in the fungus Aspergillus niger and called AN-PEP or A. niger prolyl endoprotease by biochemists—is marketed by enzyme maker DSM. The enzyme was originally developed for brewers to reduce haze, which is caused by proteins crashing out of solution as beer chills. Added alongside yeast in fermentation tanks, the enzyme breaks down any free proteins in solution by chopping them at their proline residues if they contain the amino acid. Both DSM and many brewing professionals claim the enzyme has no discernible effect on flavor.

Many conventional beers use Clarex to achieve a crystal-clear finish without making any claims about gluten and have for years.

Now brewers have wondered, if Clarex promiscuously chews up all sorts of proteins and peptides, why not gluten? DSM says its product breaks down the specific gluten protein that triggers an immune response.

But the Food & Drug Administration, which regulates the use of “gluten-free” labels, is not so sure that products made with protein-degrading enzymes such as Clarex fit the bill. To qualify for the “gluten-free” label, a food or beverage must contain no more than 20 ppm gluten.

Clarex is effective at reducing intact gluten below that level in beer. But, in a recently proposed regulation on products processed to destroy gluten, FDA says, “It is uncertain that cleavage at proline residues totally eliminates the concern for people with celiac disease because there may be immunopathogenic protein fragments still present.”

So for now, for products to earn the “gluten-free” label, they must test below 20-ppm gluten before the start of fermentation or treatments that break down protein. But federal regulators have approved the phrases “gluten-reduced” and “crafted to remove gluten” for beers treated with Clarex.

Despite regulatory uncertainty, a handful of companies are using Clarex to remove gluten from some of their brews, such as in Stone Brewing’s Stone Delicious IPA and New Belgium Brewing’s Glütiny. At Omission Beer—as its name would suggest—all of its beers eschew gluten.

In fact, Omission’s story began when Casey’s wife, Sara, was diagnosed with celiac disease in 2005 after the birth of their first child. “In the lifestyle we have, immersed in beer culture, her medical condition made it difficult for us to participate in life the same way we used to,” he says. They began to experiment with alternative grains such as tapioca and sorghum in 2006.

“We gave it a whirl, made some beer that tasted okay for what it was,” he says. “But it just didn’t deliver on the beer experience.” So they began to experiment with Clarex. The first Omission beers hit the shelves in 2012.

Omission tests each batch repeatedly for gluten content, which Casey says has consistently been below 10 ppm, the detection limit of the enzyme-linked immunosorbent assay (ELISA) it uses. The labels include tracking information so that consumers can view the data for their exact bottle on Omission’s website. Stone Brewing posts similar data on its offering.

As brewers wait for regulators to finalize labeling rules, this fast-growing, gluten-shunning niche of the craft beer market is currently valued at $21 million annually, according to research firm Nielsen. Beers that are enzymatically treated to remove gluten account for more than half of this niche, while the remaining brews are made from grains that never had gluten to begin with.

UPDATE: This article was modified on Nov. 7, 2016, to refresh its information and data.

Comments
Stephen Jacobs (June 1, 2016 6:46 PM)
Flatly: celiac disease is not triggered by an immune reaction against gluten. I personally believe that the involvement of the immune system in celiac disease is part of the healing process of an initial chemical-burn-like injury, but that is arguable.

Rather than continuing at length, I refer you to my argumentative review at doi:10.1016/j.mehy2006.07.023 While the case for my preferred explanation may not be compelling, the case against a primary immune event is.
Reply »