A century later, experts reflect on whether it could happen again

This year marks the hundredth anniversary of the worst influenza outbreak in modern history. The 1918 flu pandemic infected 500 million people—one-third of the population at that time—from remote Pacific islands to the Arctic. The virus killed anywhere from 50 million to 100 million people.

Although it’s commonly called the Spanish flu, most historians agree that the 1918 pandemic started in Kansas in the spring of that year. The first victim on record was Albert Gitchell, a cook at Camp Funston, part of the Fort Riley military base, says Kenneth C. Davis, historian and author of the forthcoming book “More Deadly Than War: The Hidden History of the Spanish Flu and the First World War” on the pandemic.

The virus spread quickly through the military base and then across the country as soldiers were deployed to other military installations. Soldiers brought the disease to Europe, where it spread rapidly in barracks, trenches, and crowded cities.

“We can’t say the flu changed the outcome of the war, but it certainly had an impact on the progress of the war,” Davis says. At one point, Britain’s Royal Navy could not sail because so many sailors were ill. And in June, which is late in a typical flu season, the German army couldn’t mount an important offensive campaign because half a million German soldiers were sick with the flu.

News of the flu was largely kept quiet that spring. Warring nations censored or buried newspaper accounts of the outbreak’s severity. “Governments were trying to keep this quiet to keep morale up and not to let the enemy know they were weakened by the flu,” Davis explains. Spain was neutral in the conflict, so when uncensored press reports of the outbreak in Madrid reached the English-speaking world, the virus became known as the Spanish flu. 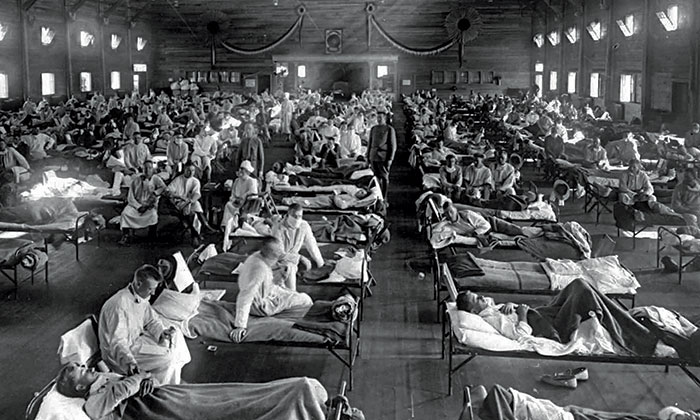 Once the summer peaked, the flu seemed to disappear. But it reemerged in late August, striking with a speed and virulence that had never been seen before. “When you read the accounts, one after another, you find the same phrase used over and over: Bodies were stacked like cordwood,” Davis says.

The elderly and the young are typically hit hardest during flu outbreaks. But in 1918 and 1919, most of the flu’s victims were healthy, young adults. This, scientists think, could be because their immune systems’ responses to the infection were so forceful that they ended up being fatal—a phenomenon experts refer to as a cytokine storm.

With an outbreak that claimed so many young lives—and more people than the entirety of World War I—everyone worries: Could the world see another outbreak as severe as the 1918 pandemic?

“You find the same phrase used over and over: Bodies were stacked like cordwood.”

Looking back through historical records, it’s clear that influenza outbreaks date as far back as the 1500s. Many flu researchers say the possibility of another one lends a sense of urgency to their work.

Seema Lakdawala, an expert on flu transmission at the University of Pittsburgh, says she’s not convinced we’ll ever see an outbreak as bad as the one 100 years ago. “I think we have better countermeasures now,” she says. “Our ability to contain and respond during a pandemic is so much better than it was in 1918.”

She points to the 2009 swine flu pandemic as an example. “We had an emergence of a pandemic virus that was completely novel, highly transmissible, and lethal—maybe not as lethal as the 1918 virus—and we were able to produce a vaccine,” Lakdawala says. Doctors now have a wide range of antivirals to use as well as antibiotics to fight pneumonia that often infects and subsequently kills people who have the flu. “I think that if another pandemic were to emerge, we have that same arsenal in hand,” she says.

And researchers are working to develop better antivirals and more sophisticated vaccines. Whether or not we will ever have to call on that arsenal remains to be seen, but experts agree that it’s important to learn from what happened in 1918.