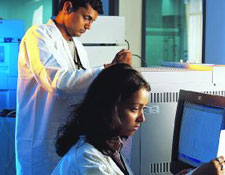 Last month, the Wall Street Journal reported unannounced plans by IBM to move more than 4,000 software jobs--paying up to $100,000 per year in the U.S.--to India and China. According to the story, "relentless pressure to cut costs is pushing more operations offshore." Jobs moving overseas used to be confined to low-skill work, but not anymore. High-knowledge, high-technology jobs are migrating, too.

What's not certain is whether Western firms will continue to be their major suppliers and, if they are, whether their role will continue to involve a significant workforce in the West. As Asian manufacturers pile on quality, credibility, and reliability over their unbeatable cost structure, some observers predict that pharmaceutical custom manufacturing--which is a high-knowledge, high-technology activity like software development--will move to Asia.

Aceto is an intermediary between primarily manufacturers in developing countries and drug companies in the U.S. and Europe. It has expertise in bringing such manufacturers up to industry standards so that they can successfully sell APIs to a U.S. or European drug company or intermediates to Western API manufacturers, Schwartz says. To date, Aceto has raised 15 Chinese manufacturers to Food & Drug Administration standards. Aceto also arranges the regulatory filings and documentation to support drug applications.

In return, Aceto has exclusive supply agreements with these producers and is listed as their registered agent with FDA. "Once we establish the supply, we have a high degree of security," Schwartz says, adding that "we've never had disruptions."

Although most of the API manufacturing in China and India is still for the generic drug market, big pharmaceutical companies are sourcing more and more advanced intermediates from Asia, Schwartz says. It will be just a matter of time before bulk APIs for brand-name drugs are sourced directly from Asia, he suggests.

"GENERALLY, it costs less than half as much to make a product in China than in the U.S. or Europe," Schwartz says. "With the pressure on the pharmaceutical industry to cut costs--even though the API makes up only 5% of the selling price of a patent-protected drug--it is becoming more and more a target for cost cutting."

A sense of how much can be saved by manufacturing in Asia comes from Divi's Laboratories, a manufacturer of APIs and advanced intermediates based in Hyderabad, India. According to Swiss fine chemicals consultant Peter Pollak, Divi's "shocked" the Western fine chemicals world in the mid-1990s when it dedicated a 1,000-m3 multipurpose current Good Manufacturing Practices fine chemicals plant in Hyderabad. The plant, Pollak says, was built for the "ridiculously modest sum of $25 million."

"We built that plant on 300 acres of land," says Murali K. Divi, Divi's chairman and managing director. "The same facility in Europe or the U.S. would have cost between $250 million and $400 million. The cost of capacity is low. Labor costs are one-tenth of those in the West."

Divi says low costs and high-caliber process chemistry have catapulted the company to the top tier of manufacturers of APIs for generic drugs. For example, it is now the second largest producer of the analgesic naproxen and the cough suppressant dextromethorphan, second only to Roche, despite being one of the last manufacturers to enter those markets, he explains. And the company now supplies more than 90% of the global demand for cis-(+)-hydroxylactam, an advanced intermediate in the synthesis of the antihypertension drug diltiazem, despite being the 18th manufacturer to enter that market. "We became the world leader because we have the best process," he adds.

But what the company really eyes is the big prize--custom synthesis for brand-name products of the big pharmaceutical companies. "Back in 1994, I saw that if we respect intellectual property, if we never violate process patents, and if we never make a product that is still protected by patent, then we have a good chance to be one of the preferred suppliers of the big pharmaceutical companies," Divi tells C&EN. And it was toward this prize that the company built the Hyderabad plant, he says. "But having built it, you don't get business from big pharma on day one. It takes years to get business from them. So meanwhile we pursued APIs for generics."

The strategy is paying off. For the fiscal year ending in March 2003, Divi's introduced 11 products, of which seven were custom synthesis projects. Exports make up more than 90% of sales, with 64% of sales coming from Europe and North America, according to the company's latest annual report. Divi says sales and profits have been growing at a rate of 25% over the past two years, "and we expect that trend to continue."

A visit to India last November has convinced Pollak more than ever about the inevitability of pharmaceutical custom manufacturing moving to Asia. "I was surprised at what they do in India," he tells C&EN. "First of all, they graduate 25,000 chemists every year. And they are prepared--there are a lot of rich people in India--to invest. I've seen a company with very small sales in fine chemicals that has hired 130 chemists to develop processes for APIs."

Pollak refers to Jubilant Organosys, a chemical manufacturer based in Noida, near New Delhi. It registered sales of $150 million in fiscal 2003.

"As of today, the company is a major player in traditional organic intermediates, for example, synthetic pyridines," Pollak says. "But they are moving very aggressively in pharmaceutical fine chemicals, recruiting staff for marketing and R&D and just recently opening a top-class R&D center."

Shyam S. Bhartia, Jubilant's chairman and managing director, says the company's API business is growing at 30% per year, and exports--targeted to the U.S. and Europe--are growing at 77% per year.

More than five years ago, the company decided to focus more on R&D-driven, high-value-added products. Entering the API market was a "natural ascension from our existing line of advanced intermediates and fine chemicals for pharmaceuticals and agrochemicals," Bhartia tells C&EN. With more than 25 years of experience in chemical development and manufacturing, the company was in a strong position to take advantage of the growing opportunities in APIs for generics, he explains. "The company has always laid tremendous emphasis on R&D, and this has enabled us to develop noninfringing processes for all of our APIs," he adds. "We have identified 20 APIs for development over the next two years," Bhartia says.

Another point that Bhartia emphasizes is the commitment of Jubilant Organosys to responsible management of environmental, health, and safety issues. "We were one of the first companies in India to publish a report about sustainability management systems we have put in place," he says. "Our record on environment, health, and safety issues, as well as corporate social responsibility, makes us a reliable supplier for the long term," he says. That's important, he explains, because any company that does not handle these issues properly will be vulnerable to production shutdowns.

BACK IN THE U.S., Aceto's Schwartz is convinced that all pharmaceutical fine chemicals manufacturing will move to Asia for the simple reason of economics. A few producers will remain in the West, he says, because some big drug companies may not yet completely trust Asian suppliers or because those producers have access to technology that is not yet available to Asians. "But the business is definitely shifting."

"The famous typewriter manufacturers--Remington, Smith Corona, Underwood--did an excellent business in making typewriters, but they did not realize that the personal computer would take away their business. They are all gone," Pollak notes. "Could something similar be happening in Western fine chemicals?"

Perhaps not, because Western fine chemicals companies are setting up shop in Asia. Rhodia, for example, has 17 manufacturing facilities in China, according to Nick Green, head of Rhodia Pharma Solutions. And Clariant is pushing nonregulated, low-margin products to its plants in India, says Norbert Dieterich, head of Clariant's pharmaceutical business. Global companies like these are prepared to situate production for the highest cost efficiency. Where that will leave the highly educated and highly skilled U.S. and European workforces is up in the air.

Pharmaceutical Chemicals
China to dominate the radar in pharmaceutical services
Business
Running out of capacity at WuXi’s manufacturing arm
Pharmaceuticals
Asian Fine Chemical Firms Rethink The Move West
Share X
To send an e-mail to multiple recipients, separate e-mail addresses with a comma, semicolon, or both.
Title: ASIAN COMPETITION GATHERS STRENGTH
Author: A. Maureen Rouhi
Chemical & Engineering News will not share your email address with any other person or company.