Combine science and hard work with creativity, then get down to business 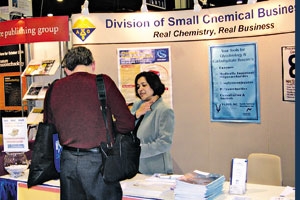 "I've often been asked, 'Bader, when you started out, did you plan to build a large fine chemicals company?' said Alfred Bader last month at the National Institutes of Health about cofounding Aldrich Chemical and giving advice to young scientists who want to start their own businesses. "No, I didn't," he said. But Bader said he realized that he could have a place in the business while he was a Ph.D. student at Harvard University in the late 1940s.

He recalled ordering some 2-isopropylphenol from Kodak's catalog. When it didn't arrive in six weeks, Bader wrote to the company. Kodak replied via postcard: "We have your order. We will ship it when we have the material. In the meantime, do not add to the paperwork. Do not write to us again."

Bader never forgot his poor customer service experience in graduate school. Several years later, while working at PPG in Milwaukee, he proposed starting a fine chemicals division. When the research director rejected the idea, citing that no one could compete with Kodak, Bader and a lawyer friend gathered $500, usurped the lawyer's wife's maiden name for their fledgling firm, made chemicals in a rented garage at night and on the weekends, and sold them under the Aldrich label.

Businesses that start small are a big component of the U.S. economy. According to 2004 statistics from the U.S. Census Bureau, 99.7% of companies have fewer than 500 employees. Of the 5.75 million firms in the U.S. that year, 5.15 million employed fewer than 20 people.

In their first year, Bader and his partner offered a single chemical and made a $20 profit. A few years later, Bader left PPG to work full-time for Aldrich. The research director at PPG kindly offered to take Bader back if Aldrich failed.

Bader never took him up on that offer because his company prospered. Now called Sigma-Aldrich, it is the world's largest supplier of research chemicals, with annual sales of more than $1.6 billion.

Bader is just one example of hundreds of entrepreneurial successes in the chemical sciences. The entrepreneurs C&EN interviewed for this story agree that time and money are vital for success, but so are good bookkeeping, flexibility for dealing with inconsistent income, doing whatever needs to be done (from technical sales to cleaning the bathroom), networking, and asking for help from more experienced people. But clearly, people use many different formulas to start their own businesses.

Small companies can spin off from large companies. Take the case of George Y. Li, who enjoys taking results from the lab to the marketplace. Personal funding and a licensing agreement with DuPont allowed him to start his business in 2001. His company, CombiPhos, based in Princeton, N.J., commercialized a novel catalyst technology that Li invented while working at DuPont Central R&D in Wilmington, Del.

The beauty of these highly active and air-stable cross-coupling catalysts is that they work for many coupling reactions for which traditional palladium catalysts do not work or are less efficient to use, says Li, a Ph.D. chemist.

"So far, the major hurdle appears to be keeping up with the growing demand," he says. For example, this year, a large pharmaceutical company applied 30 kg of a CombiPhos product to its pipeline, he says.

Technologies created at universities can help launch companies, too, as Earl H. Wagener experienced. He got a call from Dennis W. Smith Jr., currently on the chemistry faculty at Clemson University in South Carolina. Smith and two other Clemson chemistry colleagues (John Ballato and Stephen H. Foulger) were thinking about starting a company by licensing polymer technologies from Clemson. They wanted Wagener to help them and act as chief executive officer. Wagener said, "Why not?" They called their company Tetramer Technologies to play up the fact that they had four founders working on polymer products.

Wagener, a Ph.D. chemist, gained his business savvy working in R&D leadership positions for decades at Dow and Stepan. He had even worked for an internal venture capital, entrepreneur-type enterprise inside Dow and admired the ideas and drive of the entrepreneurs who came seeking funding. But he never thought he would be an entrepreneur himself.

Wagener likes the challenges, but has found that being an entrepreneur is not always glamorous. For example, Tetramer Technologies began proudly but humbly in a dilapidated building between a car wash and a veterinarian's office in Pendleton, S.C. Five years later, it has renovated its space and now employs 11 people. The four founders prefer funding from three different National Science Foundation-funded Small Business Innovation Research grants to venture capital. 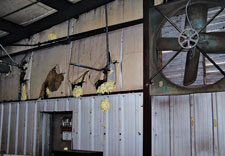 Wagener emphasizes the importance of having business partners who can work well together and recommends making sure that the goals of the university align with the goals of the company to avoid conflict. He also teaches a business-infused course in the chemistry department at Clemson. He hired four people from the first class, and of the 18 people who have worked for Tetramer, he says, only one was not educated at Clemson.

Partners often start businesses with their own resources. In 1979, chemists Sharon V. Vercellotti and her husband, John, started V-Labs Inc., a carbohydrate-manufacturing and analytical services company. They used a combination of their own money and a guaranteed Small Business Administration loan to start up in their hometown of Covington, La. "We found that we didn't need to be located anywhere special. We just needed a good phone, FedEx, and an airport nearby," Sharon says. 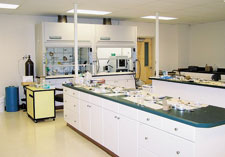 Sharon ran the business by herself from 1985 to 1995, while John took a job at with the Department of Agriculture. Over the years, she says, the technical work has been stimulating. She cites some "anxious moments" but says, "We're still here." V-Labs has four employees. Sharon is also active in the American Chemical Society Division of Small Chemical Businesses (SCHB) and says, "Membership in the division has been very valuable to me."

In addition to ACS, professional societies such as the American Institute of Chemical Engineers and the American Association for the Advancement of Science hold sessions at their annual meetings for people with entrepreneurial aspirations. In meeting technical sessions, speakers discuss how they became entrepreneurs and what services are available. During panel discussions, social hours, or receptions, entrepreneurs get valuable networking time with potential clients, investors, scientific advisers, business mentors, and other entrepreneurs.

ACS meetings can also be a chance to showcase new products, and SCHB provides free booth space in the exposition hall to division members.

ChiroSolv Inc., based in San Francisco, is one of the companies that has appeared at the SCHB booth in the past year. Four years ago, Niteen A. Vaidya, a Ph.D. organic chemist, began developing prepackaged, 96-vial research tool kits that can speed up R&D screening of chirally pure compounds. In 2006, when he had sold more than 200 kits, he and his wife, Neelam, who is a software engineer, formed ChiroSolv Inc. with equal ownership. Neelam is the CEO, and Niteen is the chief technology officer. Their clients include biotechnology companies.

Conferences and expositions are good places to meet new clients and practice giving a brief description of a product. Neelam says she's seen a lot of people with good products who didn't have a short explanation to convince buyers or investors.

Spirited
[+]Enlarge
Credit: Rachel Petkewich/C&EN
Jones (left) and Vercellotti take a break at a session for women entrepreneurs at the ACS national meeting in San Francisco in September. 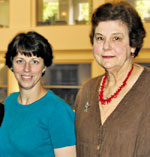 Credit: Rachel Petkewich/C&EN
Jones (left) and Vercellotti take a break at a session for women entrepreneurs at the ACS national meeting in San Francisco in September.

Lynda J. Jones, who also showed off her product at the recent national meeting in San Francisco, met her new business partner, Jerry DeMenna, at an ACS meeting last year. Over the past six years, Jones has been developing Holy Mol-ee!, a strategy for teaching chemistry through song, dance, visual aids, and skits. The teaching materials are geared primarily toward middle and high school students, but they can be used for earlier grades and even community colleges. Jones is based in California and has a master's degree in chemistry and experience as a high school and college teacher.

"Teachers are buying it, using it, and giving me feedback," she remarks. Approximately 600 customers, including public, private, and home-school teachers, have bought the product at different stages of its development.

The road has been rocky for Jones, from hiring recommended singers who couldn't carry a tune to contracting with a video editor who lost the footage. Financing initial product development on a credit card wasn't the best monetary strategy, but she has a good product, a vision for the future, and numerous opportunities, she says. For example, she has a television and podcast show in the works and an offer to franchise an after-school learning program based on her material. Jones and DeMenna have also combined their talents to produce a line of technology-teaching kits, which were introduced at the San Francisco meeting.

"Being an entrepreneur is a different way of taking responsibility for your own life. It's scary, but I wouldn't trade it," Jones says.

Entrepreneurs offer a wide range of advice for budding small-business owners. What advice does Aldrich cofounder Alfred Bader give to scientific entrepreneurs? Find a niche market, get good people to work with you, and be sure to answer every customer's query. "Don't be like Kodak," he said. "They are no longer in the fine chemicals business."