Bridges Wait To Be Built

Border Crossing
[+]Enlarge
Credit: Photo By Amanda Yarnell
India is struggling with how to train the interdisciplinary workforce that its burgeoning drug development industry will need. 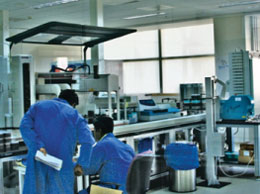 Credit: Photo By Amanda Yarnell
India is struggling with how to train the interdisciplinary workforce that its burgeoning drug development industry will need.

Bridges Wait To Be Built

In most of India's research institutions, top-notch chemists, biologists, and physicists have worked within yards of one another for decades without ever having taken notice of possible synergies in their work. These days, however, there is increasing acknowledgment that the dearth of interdisciplinary collaboration in India is holding back cutting-edge science.

"Collaboration between academic departments is mandatory if both fundamental science and societal utility are to be served," argues J. B. Joshi, director of the Mumbai University Institute of Chemical Technology (UICT). But "examples of collaboration between Indian research groups are few and far between," says University of Delhi synthetic chemist Virinder S. Parmar. He notes that the few collaborations that do arise-such as his own with colleagues in the biochemistry and microbiology departments to elucidate new cellular mechanisms of acetylating proteins-tend to be purely happenstance: A chance meeting at an off-campus symposium initiated the project.

"The boundaries in India are even more clearly drawn than they are in the U.S.," adds biochemist Aseem Z. Ansari of the University of Wisconsin, Madison. He remains disappointed by what he sees as a widespread inability to engage in interdisciplinary work in India because of the compartmentalization of undergraduate education. For chemists, "there is a lot of value in retaining strong synthetic skills. But these skills will remain one-dimensional unless they are applied to new problems," he says.

Chemist M. N. Gupta of the Indian Institute of Technology (IIT) in Delhi chalks up India's failure to capitalize on opportunities for interdisciplinary collaborations to a culture of insecurity. "India's scientists are forever worried that people will steal their ideas," he says.

"We need people who will take chances," adds chemist Gautam Desiraju of the University of Hyderabad. "The Indian system is strangled by fear and mediocrity."

In fact, very few Indian institutions have managed to build a truly interdisciplinary culture. One notable exception is Bangalore's National Centre for Biological Sciences, home to a diverse collection of researchers taking different approaches to answering key biological questions. It has recently begun recruiting chemists in earnest, including recent hire Mrinalini J. Puranik, who is using ultrafast Raman spectroscopy to study the mechanisms of radiation-induced DNA damage, and Yamuna Krishnan-Ghosh, who is studying the structure and dynamics of nucleic-acid-based assemblies in the hopes of one day building artificial nucleic-acid-based molecular machines.

Some of India's more traditional institutions are trying to encourage interdisciplinary science by creating centers that bring scientists from different disciplines together to work on similar goals. For example, the Indian Institute of Science in Bangalore has founded centers for nanoscience and chemical biology in the hopes that "departments will increasingly become simply administrative constructs," says director Padmanabhan Balaram. Similarly, the National Chemical Laboratory (NCL) in Pune has broken ground on a state-of-the-art interdisciplinary materials science research center.

India's government is trying to catalyze interdisciplinary links by providing funding for cross-institution projects in green chemistry and bioinorganic chemistry. It also has launched a new funding initiative to encourage collaborative links between industry and academic labs. For instance, Hyderabad-based pharmaceutical firm Dr. Reddy's and the University of Delhi have teamed up in the area of nanobiotechnology. And textile firm Arband Mills is collaborating with scientists in IIT Delhi's textile engineering department to develop nanotextiles.

The needs of industry may provide further fuel for interdisciplinary work, notes IIT Delhi computational chemist B. Jayaram. He is working with NCL synthetic chemist Mukund Gurjar and medicinal chemists at Dabur Pharmaceuticals to design nuclear-hormone-receptor-targeted anticancer drugs. Jayaram's lab is using its own software-christened Sanjeevini, a traditional Hindu word for miracle drug-to predict molecules that might inhibit this receptor. Gurjar's lab will synthesize promising candidates, and Dabur will do the in vivo biological testing and provide funding for the venture.

But a widespread embrace of interdisciplinary research in India is likely to require more fundamental changes. In fact, many question whether India's highly compartmentalized science education system is remotely capable of preparing students to function in a climate of interdisciplinary science.

In particular, "undergraduate coursework needs to be less rigid," argues A. V. Rama Rao of Avra Laboratories. In the current system, students can't double major in chemistry and chemical engineering, he notes. "We need to give students more options to choose from."

S. Anand Kumar of AstraZeneca Research Foundation India is particularly concerned that "chemistry teaching here gives students no appreciation of biology. There's been a divide between chemists and biologists." He says that divide has translated into a failure to educate the medicinal chemistry workforce that India will require to support its burgeoning drug development industry.

In the hopes of breaking these barriers to train a new generation of interdisciplinary scientists, the Indian government has begun construction of interdisciplinary research universities in Pune and Kolkata, with three more planned. Physicist Sushanta Dattagupta of Kolkata's Bose Centre, who is spearheading the effort, says the new Indian Institutes of Science Education & Research (IISERs) will give students and faculty an opportunity not found elsewhere in India.

The new universities will have no departments, he says, "giving chemists the opportunity to work alongside physicists and biologists." Undergraduate students will complete a broad, two-year core curriculum in chemistry, physics, biology, and math before they select a specialization. They will also carry out an original, independent research project during the last year of the five-year integrated B.Sc./M.Sc. program.

Each IISER campus has been promised an annual budget of $120 million for the next five years, according to Dattagupta. Set to begin classes this fall, each of the Pune and Kolkata campuses eventually will have 200 faculty members and around 1,000 graduate students and 1,000 undergraduate students.

Interdisciplinary science will dominate the coming century of research, Dattagupta says. Both new and established universities in India must diversify their curricula so that their students can take advantage of these opportunities, he argues. "India must prepare young students with a borderless curriculum so that they develop an open mind and a broad base to embark on interdisciplinary research."

Profiles
American Takes Charge In Tianjin
Business
Solvay Opens R&D Center In India
Environment
Polymer School Set To Rise In India
Share X
To send an e-mail to multiple recipients, separate e-mail addresses with a comma, semicolon, or both.
Title: Bridges Wait To Be Built
Author: Amanda Yarnell
Chemical & Engineering News will not share your email address with any other person or company.