Some of India's scientists find research dollars easier than ever to obtain, but inequities remain

Feeling Flush
[+]Enlarge
Credit: Photo by Amanda Yarnell
Hotha of the National Chemical Laboratory says he has had great success in attracting funding for high-quality instrumentation. 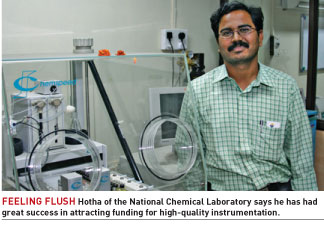 Credit: Photo by Amanda Yarnell
Hotha of the National Chemical Laboratory says he has had great success in attracting funding for high-quality instrumentation.

"Early in my career, I thought that money would control my ability to do great science here in India," says Srinivas Hotha, a young bioorganic chemist at the National Chemical Laboratory, a prestigious federally funded institute in Pune. But things have changed. "Now I don't feel any pinch for funds or lack of equipment," he says, pointing to the brand-new parallel synthesizer sitting in his modern laboratory.

"With a good research proposal, it's no longer hard to get research money in India," adds chemist Pradeep Mathur of the Indian Institute of Technology Bombay.

Indian scientists are enjoying a vastly improved research funding climate. Federal funding of scientific research, which stagnated in the 1990s, has since climbed to record levels. The country's most prestigious institutions boast world-class instrumentation, and its best scientists are finding it easier than ever to fund their research.

But India's annual science and technology budget remains smaller than the annual R&D budget of a large multinational pharmaceutical company-Pfizer's R&D budget for 2004-05 was $7.7 billion-and is less than 1% of the country's gross domestic product. Even so, the Indian government appears to be more committed than ever to invigorate scientific research: The 2006-07 budget unveiled earlier this month includes $4.5 billion in science and technology spending, a 16% hike from last year's budget.

Not everyone is feeling as flush as Hotha and Mathur. Many scientists remain concerned about equitable distribution of research monies in India's still-feudalistic scientific society. Funding bodies are "not supporting innovation as much as elitism here in India," says chemist M. N. Gupta of the Indian Institute of Technology Delhi. Too often, monies are distributed on the basis of seniority and favoritism instead of a proposal's creativity and scientific merit, he says, adding that what's needed is "more accountability."

In addition, there are widespread calls for improving the scientific lot of India's universities and colleges, particularly the cash-strapped state-funded ones that shoulder the lion's share of the country's educational burden. Researchers at these schools have been left behind as the scientific fortunes of those at federally funded institutions have risen, notes Vilas D. Athawale of the well-respected and state-funded University of Mumbai. There are vast inequities in infrastructure and instrumentation facilities at these institutions, he notes. At Osmania University, another well-respected state-funded university in Hyderabad, getting research funded remains difficult, says G. L. David Krupadanam of the university's chemistry department.

Krupadanam says most of his colleagues must make ends meet with the limited research funds attached to their students' fellowships or with money earned from industry-sponsored contract work. Lab infrastructure is antiquated and equipment sorely outdated, he adds. Teaching labs at Osmania's more than 500 satellite college campuses are even more dilapidated.

In response to such criticisms, the federal government earlier this month pledged $25 million in research funding to each of three state-funded universities, including the University of Mumbai, where the annual science research budget is less than $250,000, Athawale notes. Simply pumping research money into cash-strapped universities may not be enough to fix the problem, however, because decades of neglect have robbed many of these institutions of their best scientists.

The federal government has also backed the formation of a new independent agency along the lines of the U.S.'s National Science Foundation to deliver federal research monies. The fully autonomous National Science & Engineering Research Foundation (NSERF) is expected to have an annual budget of nearly $250 million-more than three times what's now doled out by the Department of Science & Technology's Science & Engineering Research Council.

"We need a body whose full-time job is to think about scientific research funding and education," says C. N. R. Rao, a chemist at Bangalore's Jawaharlal Nehru Centre for Advanced Scientific Research. He hopes that, as an independent body, NSERF will be able to cut back on the bureaucratic delays that currently stymie the Indian government's grant review and distribution process.

Many scientists hope NSERF will bring new blood into the review process. "We are not putting our best scientists on review panels," Gupta says. Medicinal chemist Ram Vishwakarma of drug firm Nicholas Piramal says he hopes the new agency will further increase the number of industrial scientists participating in peer review.