Inspiring
[+]Enlarge
Credit: Photo by Amanda Yarnell
As a student at Mumbai University Institute of Chemical Technology, Shraddha S. Sadekar is one of the few undergraduate students in India who get to rub shoulders with top research scientists. 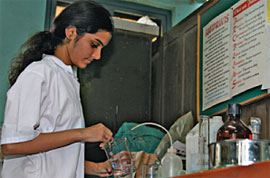 Credit: Photo by Amanda Yarnell
As a student at Mumbai University Institute of Chemical Technology, Shraddha S. Sadekar is one of the few undergraduate students in India who get to rub shoulders with top research scientists.

In India, the demand for college degrees long ago necessitated a divergence between undergraduate and graduate science education. Although India's problem of scale has not gone away-the country's higher education system churned out a stunning 2.5 million college graduates last year-many argue that the divide has hurt both science education and science research.

"The symbiosis between teaching and research sadly has been lost here in India," says physicist Sushanta Dattagupta of Calcutta's Bose Centre, named in honor of the late Indian physicist Satyendra Nath Bose. As an example of the good that can come from such symbiosis, Dattagupta notes, Bose formulated the theory underlying Bose-Einstein condensation in response to a question posed by a student in one of his lectures at the University of Calcutta. Since then, however, "we've deprived our young students of access to our brightest scientists," he points out.

Student enrollment in India's purely undergraduate colleges in the past two decades has grown at more than twice the rate of population growth. Faced with such huge student demand, "India's universities have divested themselves of teaching undergraduates," explains S. Sivaram, director of the National Chemical Laboratory (NCL) in Pune. Undergraduate teaching has been left to satellite colleges affiliated with the university system, leaving universities to focus on research activities as well as the education of master's and doctoral students.

After India gained its independence, the government channeled its limited research funding to national labs directed to address national problems and stimulate local industry. Over the years, the better facilities and funding at these national labs have proven tempting to many talented researchers from academe, "slowly depleting research-driven universities of their best faculty," explains Padmanabhan Balaram, director of the Indian Institute of Science (IISc), a prestigious research institute in Bangalore.

The better infrastructure and funding at the national labs also has wooed Ph.D. students. For instance, in the past three years, the number of students pursuing doctorates at NCL has more than doubled. It's now the largest producer of chemical sciences Ph.D.s in India, according to Sivaram. Theoretical chemist Ramesh C. Rastogi of the University of Delhi says the fact that "our national laboratories have taken over the job of educating many of our best Ph.D. students" has deprived many universities of attention and precious research funds from government funding agencies.

A handful of universities in India house both undergraduate teaching and thriving research under one roof, most notably the seven engineering-focused Indian Institutes of Technology (IITs) scattered throughout the country and Mumbai University Institute of Chemical Technology (UICT). Faculty members at these institutions are grateful for the opportunity to do both undergraduate teaching and Ph.D.-driven research.

"Doing research allows me to teach with authority," explains Aditya Mittal, a newly recruited faculty member in the department of biochemical engineering and biotechnology at IIT Delhi. "It gives me the opportunity to inspire young students to pursue research." His colleague Prashant Mishra adds that the traditional university culture at IIT Delhi encourages faculty to continually update their course work. "It keeps undergraduate teaching abreast of current research findings," he says.

But with only a handful of traditional universities serving a country as big as India, "most undergraduate students don't get exposed to research," Balaram points out. He worries that in the absence of such exposure, students have tended to drift away from pursuing degrees in chemistry and related disciplines. The Indian government provides summer fellowships that give upper-level undergraduate students the chance to work in research labs across the country, including IISc. But these programs remain small, providing only a few hundred fellowships each year, and suffer from high attrition.

Additionally, the government has announced plans to create a handful of new interdisciplinary science-focused research universities. Campuses of the Indian Institute of Science Education & Research (IISER) are already in the works in Pune and Calcutta, and three more are in the planning stages elsewhere in the country. The government plans to plunge an estimated $120 million into each of the new institutes over the next five years.

Dattagupta, who is spearheading the creation of the IISERs, says that the new research universities will offer both integrated B.Sc./M.Sc. degrees and Ph.D. degrees. The five-year integrated B.Sc./M.Sc. program will include a year of independent research, and students will be taught by active researchers. "Research and teaching will go hand in hand," he says.

But not everyone is pleased with the government's plans. "Setting up new universities is only running away from your problems," argues chemist Gautam Desiraju of the University of Hyderabad. "It's not addressing the problem at its root," he says, pointing to poor funding, infrastructure problems, and political interference in faculty hiring and student admissions as the real problems facing state universities and colleges.

"We must not allow these new institutions to grow at the expense of our established universities," adds synthetic chemist Ashok K. Prasad of the University of Delhi. He notes that just six universities serve the 60 million people in his native state of Bihar, and they remain poorly funded. These universities' infrastructures have virtually collapsed, and they struggle to pay their bills, he says. "They should not be allowed to die."

"Our universities are in very bad shape, and we simply cannot wait for them to change," counters chemist C. N. R. Rao of the Jawaharlal Nehru Centre for Advanced Scientific Research, in Bangalore. "We need new institutions" like the new IISERs, he says. "You can't turn a nonfunctioning institute into a functioning one," adds Ram A. Vishwakarma, who heads medicinal chemistry efforts at drug firm Nicholas Piramal's new R&D center in Mumbai.

Nevertheless, Vishwakarma questions whether simply exposing students to scientific research during their undergraduate years will really coax more of them into research careers. "The Indian education system does not put great emphasis on scientific research," he says. Most students see chemistry and other sciences as a third-rung alternative to studying engineering or medicine, a value system deeply embedded in Indian culture, he adds.

Publishing
India updates rules to curb predatory journals
Profiles
American Takes Charge In Tianjin
Share X
To send an e-mail to multiple recipients, separate e-mail addresses with a comma, semicolon, or both.
Title: A World Apart
Author: Amanda Yarnell
Chemical & Engineering News will not share your email address with any other person or company.