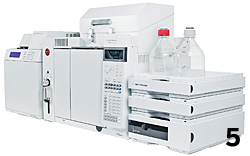 (5) Polymer Char, a leading provider of polymer characterization equipment, launched a high-temperature gel-per­meation chromatography instrument with an infrared detector. Designed specifically for analyzing polyolefins, the GPC-IR is fully automated to facilitate sample processing. The instrument loads vials, dissolves samples via heating and gentle shaking, conducts in-line prefiltering, and injects up to three times from each vial for signal averaging—a combination that eliminates manual steps and the need for solvent handling and handling vials at high temperature. In addition, the filter is automatically backflushed to a waste bottle after every injection, avoiding the most difficult and tedious operation in high-temperature GPC. The GPC-IR, which uses an Agilent Technologies GC oven and HPLC pump, can be configured with a quadruple detector system, including capillary viscometer, light scattering, and infrared detector with polymer concentration and composition sensors that operate at fixed wavelengths. A more sensitive IR detector option with a mercury cadmium telluride sensor is available for analyzing low levels of polymer branching. The IR detector replaces the standard GPC refractive index detector, which requires stabilization time, making GPC-IR faster than other instruments.

Tiger Optics displayed its Prismatic multispecies gas analyzer, a cavity ring-down spectrometer that measures from parts-per-billion to parts-per-million levels of up to 16 different trace impurities in industrial gases with a single analyzer. Prismatic’s technology is based on laser absorption spectrometry in which a laser source illuminates an optical cavity, the laser is turned off, and the light reflects back and forth many times as it “rings down” and passes through the sample. This design creates a kilometers-long path length that is highly sensitive and stable, requiring no external calibration and little or no maintenance. Prismatic’s innovation, which took more than a decade to develop, is a set of specially designed prisms that replace reflective mirrors to provide a much wider wavelength detection range, from UV to mid-IR, which enables multigas analysis. Designed with the industrial gases market in mind, the Prismatic monitors trace moisture, methane, carbon dioxide, hydrogen fluoride, ammonia, and other contaminants when preparing high-purity gases for semiconductor and other industries. 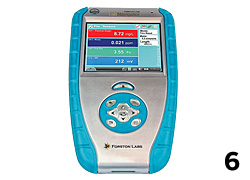 (6) Forston Labs debuted the LabNavigator, a handheld device that serves as a computer and a platform for carrying out a range of analytical measurements in the lab, on the production floor, or in the field. Designed to provide a low-cost set of tools with high functionality for analytical and environmental scientists and engineers, LabNavigator has six USB sensor ports for external probes that allow it to measure pH, turbidity, salinity, conductivity, soil moisture, humidity, and dissolved oxygen. It also can accommodate a flow meter, CO2 and O2 gas sensors, ion-selective electrodes, and a portable spectrometer for visible and near-IR measurements (380–950 nm). In addition, LabNavigator can plug in Ocean Optics’ portable spectrometers, covering UV to near-IR (200–1,100 nm). The device has rubber molding to protect against bumps and splashes and a color touch-screen display with available on-screen keyboard, built-in graphing and analysis software, and built-in GPS. It can run on a rechargeable battery or by plug-in; has built-in temperature, microphone, and sound sensors; and can interface with a printer.

Jasco unveiled the NRS-5000 and NRS-7000 Raman spectrometers, which advance the company’s NRS-3000 series to meet a wider variety of applications, ranging from high-resolution measurements to high-speed three-dimensional imaging. Rather than attaching the microscope as a peripheral to the spectrometer, Jasco designed the 5000/7000 spectrometers around the microscope to make the instruments more compact and easy to use. The spectrometers integrate up to eight excitation lasers covering the UV to near-IR region, automated laser-Raman scattering path alignment, automated grating and laser selection, and one or two detectors. The 5100 and 5200 instruments feature a 300-mm spectrograph with 1 cm–1 resolution and three selectable gratings, whereas the 7100 and 7200 include a 500-mm spectrograph with 0.7 cm–1 resolution and up to four selectable gratings. The 5000 and 7000 series offer high-speed imaging using the new Software Programmable Raman Integration System, and the Verti-Scan feature ensures consistent confocal sample excitation capability to obtain undistorted 3-D images without a moving sample stage. 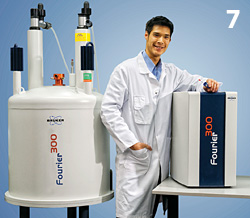 (7) Bruker announced the release of the Fourier 300, a compact 300-MHz high-resolution Fourier transform NMR instrument designed to bring FT-NMR spectroscopy within every chemist’s reach. The instrument is set up for proton and carbon one- and two-dimensional NMR without adjusting the probe for routine small-molecule studies. With its intuitive software, the Fourier 300 is aimed at industrial labs getting their first FT-NMR and for teaching labs in academia. Bruker also introduced the Q2 Ion, a benchtop spark optical emission spectrometer with UV detection for metals analysis, designed specifically for materials inspection and quality assurance of metal alloys. A third new instrument from Bruker is the amaZon SL, an addition to its line of amaZon ion-trap mass spectrometers. The amaZon SL with MS and MS/MS capability and on-the-fly polarity switching from positive to negative ion modes is designed to speed up chromatography to increase productivity in analytical labs. Bruker made its new product announcements at a Pittcon press conference but didn’t display its stable of instruments in the exhibit hall, opting instead to exhibit at the Analytica 2010 trade show held on March 23–26 in Munich. 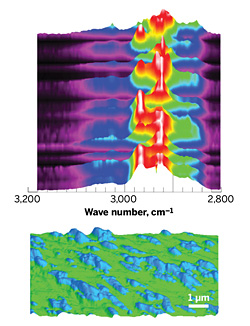 PANalytical spotlighted the Empyrean imaging X-ray diffractometer, the first instrument to offer highly resolved three-dimensional materials analysis. The instrument includes a new X-ray source, goniometer, sample stages, and easy-access radiation enclosure. But Empyrean’s novel feature is the PIXcel3D detection system jointly developed with the European Organization for Nuclear Research (CERN) as part of the Medipix2 Consortium. The PIXcel3D incorporates a semiconductor pixel readout chip designed to convert X-rays into detectable electrical signals for imaging. In effect, Empyrean correlates computed tomography with X-ray diffraction data, which allows the study of powders, thin films, nanomaterials, and solid objects, including their internal structure, all in one instrument. According to PANalytical, Empyrean was built with the idea that an instrument should be capable of accommodating change as research moves in different directions. It can be used for nondestructive 3-D analysis of drug tablets, batteries, and geological and archaeological samples, with key applications including visualizing sample inhomogeneities to identify counterfeit drugs and determining the porosity of materials such as concrete. 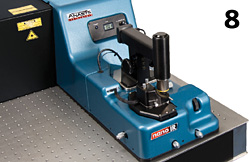 (8) Anasys Instruments introduced the nanoIR, a new lab tool that bridges the gap between the nanoscale spatial resolution capabilities of atomic force microscopy and the ability to characterize chemical species by conventional infrared spectroscopy. Based on a technique known as photothermal-induced resonance, nanoIR provides high-resolution chemical characterization of topographic, mechanical, and thermal properties of materials samples. The instrument allows users to survey regions of a sample by AFM and then acquire high-resolution IR spectra at selected sites. The instrument can also be programmed to acquire spectra automatically in an array pattern across the sample. In addition, mechanical and thermal properties, such as local thermal transitions, can be mapped with nanoscale resolution. The nanoIR can be used for studying polymer blends, multilayer films and laminates, photovoltaics, tissue morphology and histology, and subcellular spectral features.