Find out what Provivi has been up to since it appeared on C&EN’s 2015 Top Start-ups List by clicking here.

When Pedro S. Coelho arrived at Caltech from Oxford University in 2008 to begin his chemistry graduate studies, his goal was to become an academic researcher. But inside the lab of chemical engineering professor Frances H. Arnold, he saw chemists being wooed by biology and starting their own companies.

Their entrepreneurial spirit was infectious. At the time, government and private investors were funding technologies that promised to end the country’s addiction to oil. But many start-ups struggled to produce biobased products that were cost-competitive. “Now we know that some of those expectations were a little inflated,” Coelho says. “But what was true was that chemistry was changing dramatically. How people go about chemical synthesis has been very influenced by biology.”

Funding: $6.7 million in Series A financing from MLS Capital

Coelho’s entry into the entrepreneurial waters is Provivi, which he started in 2013 before he even defended his Ph.D. thesis. Provivi seeks to cost-effectively make pheromones that farmers can use to draw insects away from crops and prevent them from finding each other to mate.

At its core is Coelho’s skill in manipulating biocatalysts to produce useful chemicals that are otherwise difficult to make. He earned his molecular assembly chops working with mutated versions of the enzyme cytochrome P450.

Cytochrome P450 is the Swiss Army knife of enzymes. This iron-containing protein inserts a single oxygen atom into a range of substrates. Coelho noticed that the biological mechanism is similar to the way that synthetic chemists use transition-metal catalysts to insert a carbon atom into a molecule. Both the enzyme and the chemical catalyst are used to functionalize C=C and C–H bonds. 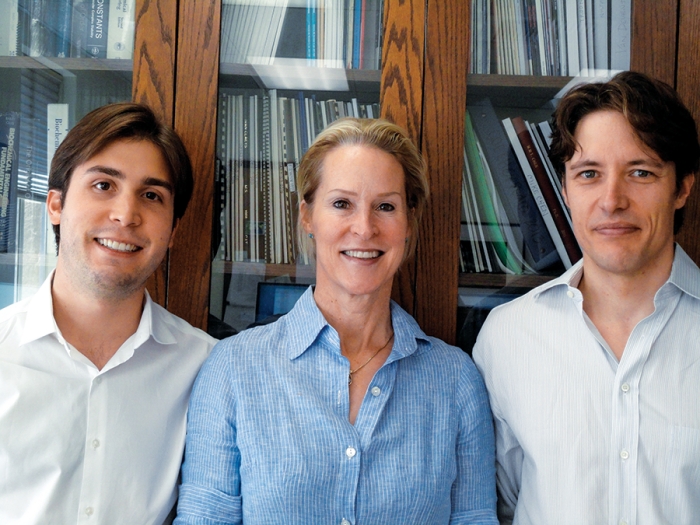 The similarity gave Coelho an idea. “If nature has already evolved P450 to catalyze a range of monooxygenation-related reactions, what would happen if I present the enzyme to a man-made substrate?” he wondered. One important reaction requiring a carbon transfer is the cyclopropanation of styrene. He found a variant of P450 from the bacteria Bacillus megaterium that could, indeed, perform the reaction, though at low yield.

That result showed that biocatalysts could drive cyclopropanation and other reactions, but they needed to be more efficient to be commercially relevant. The team used a directed evolution method to create enzyme variants that produced higher yields with strong enantioselectivity, important to making molecules biologically active.

It was clear early on that biocatalysts could be used to make all sorts of fine chemicals, Coelho says. And Arnold and Provivi cofounder Peter Meinhold had experience with biobased chemical start-ups. The two were cofounders of Gevo, which makes isobutyl alcohol from sugar.

MISDIRECTION
[+]Enlarge
Credit: Provivi
Man-made insect pheromones dispensed by lures (stars in the diagram) can draw pests away from crops and prevent them from finding each other to mate. 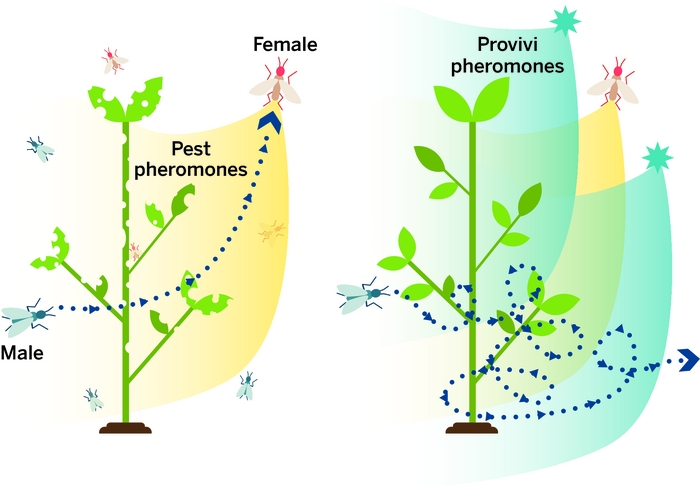 Credit: Provivi
Man-made insect pheromones dispensed by lures (stars in the diagram) can draw pests away from crops and prevent them from finding each other to mate.

“We were so confident in the technology at the beginning that we figured the business model would take care of itself,” Coelho says. But that approach made for a tough first year for Provivi. After months of interviews with industry players and investors, Coelho and Meinhold decided to focus on pheromones for the agriculture market.

Narrowing the company’s focus proved successful. This summer, Provivi raised a $6.7 million Series A round of funding from the private equity firm MLS Capital. With low-cost production methods, the firm’s pitch goes, pheromones can be used more broadly, such as on corn, rather than only on high-value fruit and vegetable crops.

Provivi is now hiring—its website shows multiple job listings—as it gears up its new technology. “We decided we are a very small company, and our bandwidth is accordingly limited,” Coelho says. “So we’ll do one thing and start with a project we are passionate about: sustainable insect control. It will be economical but also environmentally sound.”

Find out what Provivi has been up to since it appeared on C&EN’s 2015 Top Start-ups List by clicking here.