The semiconductor industry has followed Moore’s law—the idea that the number of transistors in a computer chip will double every two years—faithfully since 1965. Lately, it hasn’t been easy.

As chip circuit lines approach 10-nm widths and the industry contemplates single-digit dimensions, lithographic drawing techniques based on 193-nm light aren’t cutting it anymore. So, the industry has been developing a new technique based on 13.5-nm extreme ultraviolet light. After many years and billions of dollars, EUV lithography is almost ready.

There’s a weak link, though: the photoresists that chip makers expose with the light and then etch away to create chip features. Developed to work in 193-nm light and chemically tweaked over the years as circuit lines shrink, today’s resists are struggling to keep up. 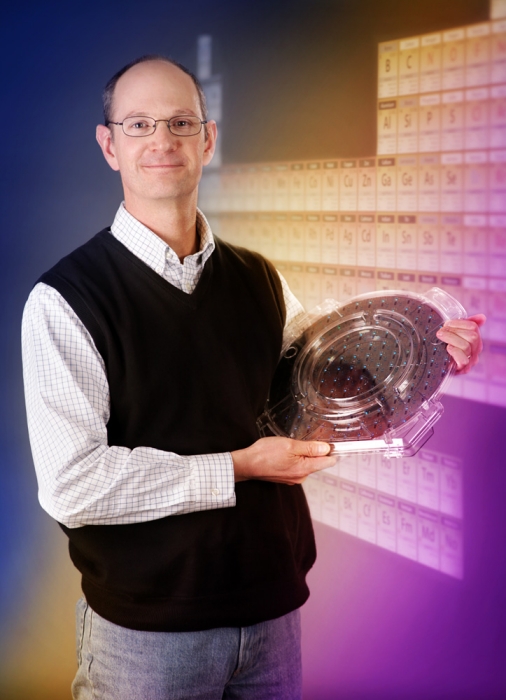 That’s where Inpria comes in. Launched in 2007 with technology developed in the Oregon State University labs of inorganic chemist Douglas A. Keszler, Inpria calls itself the first company to purpose-build a photoresist for EUV lithography.

When you do something from the ground up, you often do it differently. The veterans of photoresist chemistry—big firms such as Dow Chemical, JSR, and Shin-Etsu Chemical—base their products on acrylic polymers. Inpria, in contrast, is using inorganic chemistry—specifically tin oxide nanoclusters.

Inpria’s CEO, Andrew Grenville, who left Intel in 2007 to start the company with Keszler, explains that the large carbon chains in traditional resist molecules are getting too big relative to the feature sizes they need to pattern. The core molecules in Inpria’s tin oxides are one-fifth the size, he says.

In addition, Grenville says, the metal oxides are much more durable. They offer 10 times the etch selectivity of conventional polymers, he says, meaning the resist stands up well while a pattern is being etched into the substrate. “We’re putting the ‘resist’ back in ‘photoresist,’ ” he quips.

The electronics industry is starting to notice. In June, Inpria completed an $11 million financing round that included two repeat investors—the chip makers Intel and Samsung—and two new ones—the electronic materials suppliers Air Liquide and Tokyo Ohka Kogyo (TOK). Inpria says it will use the money to build a bigger resist facility at its Corvallis, Ore., headquarters.

As Inpria pushes ahead with tin oxides, traditional suppliers are trying to extend organic photoresist chemistry. For many years, they have employed acid-catalyzed chemical amplification to boost resist exposure. But the acid molecules can run rampant, causing roughness in circuit-line edges. For EUV, Dow’s solution is tethering the acid generator to the polymer. JSR is developing entirely new acid generators. 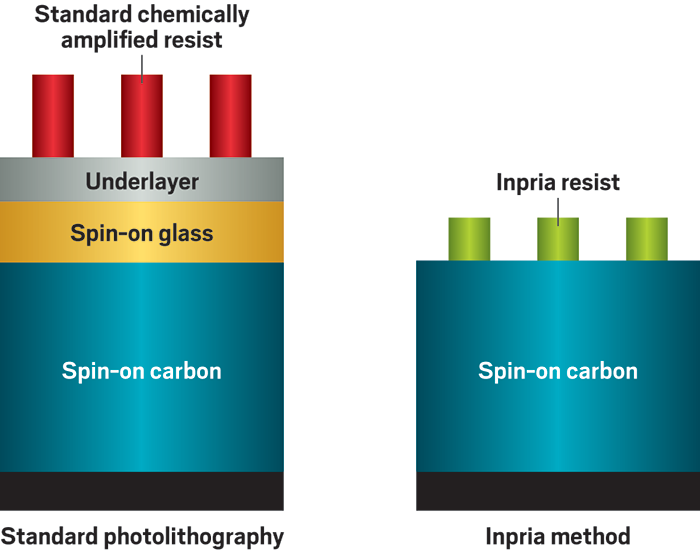 Mark Thirsk, a former electronic materials executive who is now with Linx Consulting, likes what he sees in Inpria’s inorganic approach, but he cautions that chip makers such as Intel and Samsung are comfortable with today’s acrylic chemistry and don’t especially like to change.

Grenville acknowledges that inorganic photoresists will be a brave new world for the chip industry. He also knows from his Intel years that the industry will change when given a good reason. Inpria, Grenville argues, offers that reason. “We’re coming in with a photoresist that unlocks the full potential of EUV lithography,” he says.

Ionic Liquids
Chemistry in Pictures: Papa’s got a brand new solvent
Materials
Fluorescent materials are the brightest ever made
Biomaterials
Fruit’s metallic blue caused by lipid nanostructures
Share X
To send an e-mail to multiple recipients, separate e-mail addresses with a comma, semicolon, or both.
Title: Inpria
Author: Michael McCoy
Chemical & Engineering News will not share your email address with any other person or company.