Flying robots are doing experiments too hazardous, too expensive, or simply impossible for humans 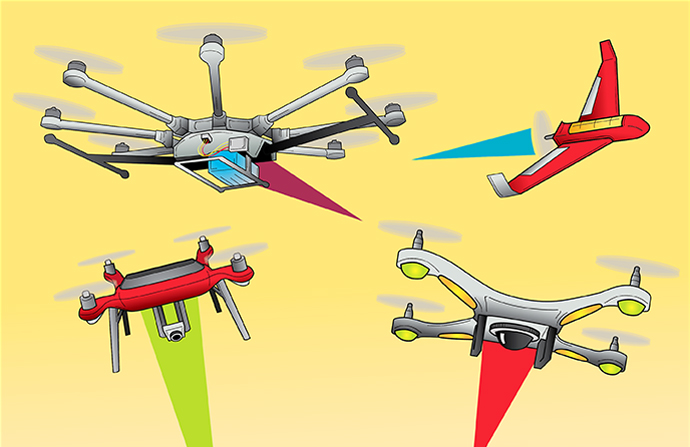 Alarmists might argue that we’re already living in the dystopian future that science-fiction writers have been imagining for decades.

Flying robots called drones now number in the millions. They’re spying on our neighbors and infiltrating the airspace of our world leaders. They’re even threatening the safety of civilians, as evidenced by recent near misses with commercial airliners and alpine skiers.

But this argument neglects the good that drones can do. Drone advocates worry that the sins of hobbyist pilots overshadow the work of scientists deploying these aircraft to solve climate puzzles, to track airborne pathogens, and to monitor chemical plant operations.

“The attention has been so much on a 1-kg vehicle crashing and not so much on its ability to transform and save lives,” says Greg Crutsinger of 3D Robotics, North America’s largest manufacturer of drones.

In this collection of vignettes, C&EN examines the confounding case of drones. These aircraft are enabling chemists and other researchers to change the way we see the planet and protect its inhabitants while simultaneously confronting regulators with new threats to privacy and safety. Even their nomenclature can be problematic—many, if not most, researchers refer to these machines as unmanned aircraft systems (UASs) or unmanned aerial vehicles (UAVs) to avoid militaristic connotations.

These stories will help you navigate the variety of drones ready for research and the rules researchers need to follow to do airborne science legally. But we also hope these tales of drones helping scientists study and monitor wildlife, climate, agriculture, and hazards will inspire you.

These vignettes are meant to exemplify, rather than catalog, all the innovative efforts of researchers to integrate drones into their portfolio of data-gathering tools. Now, sit back, relax, and enjoy the flight.

It’s hard to say how many research drones are flying in the U.S., says Colin Snow, CEO of the market research firm Drone Analyst. But we do have stats on how many professional drone users are flying with Section 333 exemptions—exemptions granted by the Federal Aviation Administration to those flying drones for commercial uses,including real estate and agriculture.

Anticipated number of drones that will sell in 2016

Percentage of drones used in commercial applications that are off-the-shelf, consumer products. Overall, 46% are made by the Chinese company DJI. “It’s the drone’s software that lets you take a consumer product and fly high-value missions,” Snows says.

Are you flying high with your science? Tell us how you’re using drones to get data. And send us your cool pics & videos too! We’ll post our favorite submissions.

On March 8, 2016, the entry form at the bottom of this page was adjusted to include a checkbox that queries whether submissions have been carried out in accordance with applicable regulations. We will make sure any submissions we post were carried out as such.

Climate Change
Adapting to climate change: How chemistry will help us thrive
Nuclear Chemistry
How chemistry helps track and detect nuclear materials
Share X
To send an e-mail to multiple recipients, separate e-mail addresses with a comma, semicolon, or both.
Title: Drones swarm to science
Author: Sarah Everts and Matt Davenport
Chemical & Engineering News will not share your email address with any other person or company.

Comments
Gene K. Lindsay (Emeritus) (March 9, 2016 9:12 PM)
Just wanted you to know that the one quarter million AMA (Academy of Model Aeronautics)members also disapprove of unsafe flying. Our organization,the AMA, promotes safe, insured flying, development of the technology of model aircraft and good government relations. Our organization is 90 years old now and we fly model aircraft of all types with an excellent safety record. If any Scientist pilots do not belong to The AMA they should and would be welcome anytime. We do good science everyday.
Reply »

Matt Davenport (April 3, 2016 7:52 PM)
Thanks a lot, Joe! With regard to your question, most of the drones I know about for research applications run on batteries, although it looks like solar-powered drones are being developed: http://www.newsweek.com/google-tests-solar-powered-internet-drones-421561
Reply »