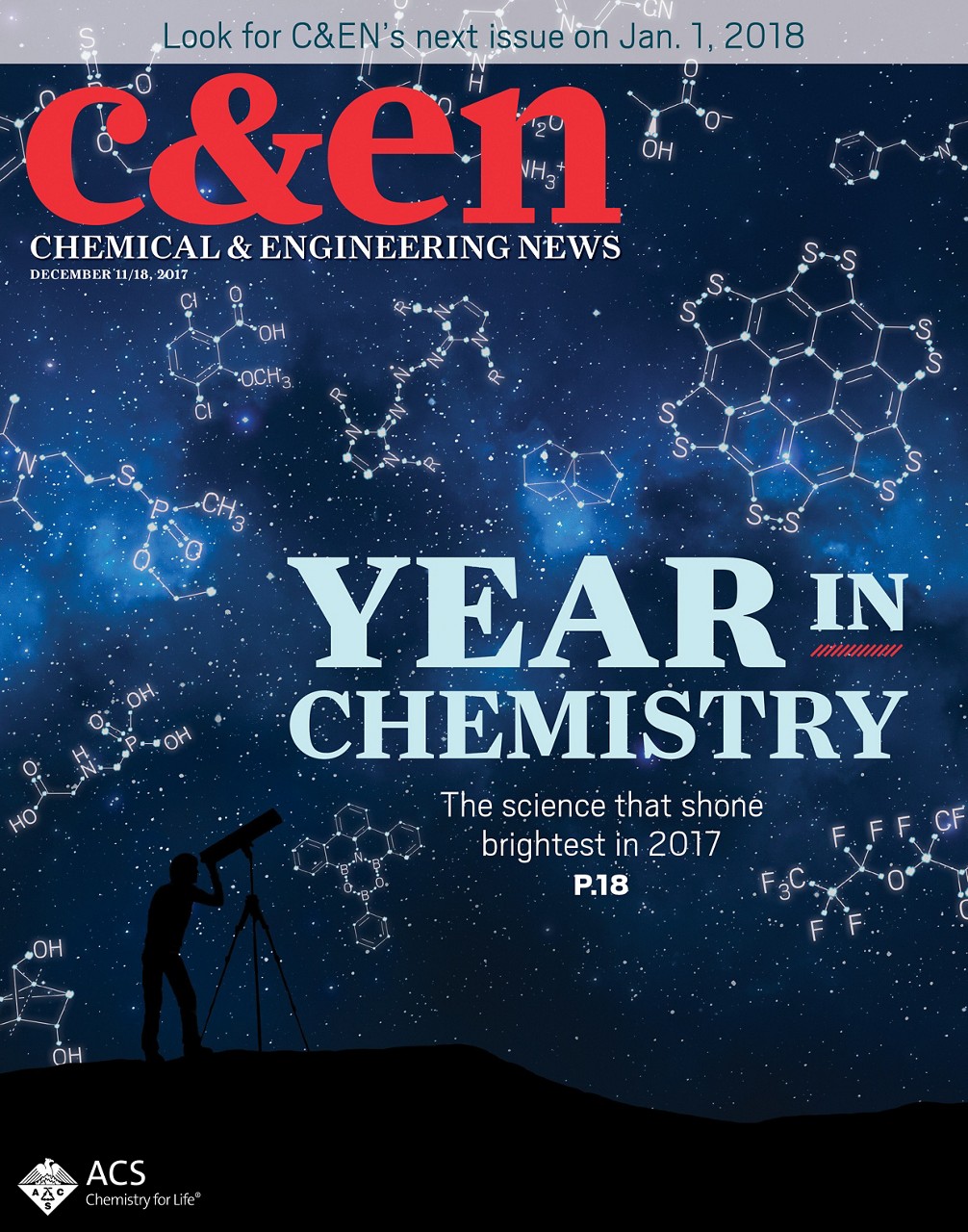 A look at the science that shone brightest in 2017

Chemists and chemistry enthusiasts demonstrate to the public the many ways that ‘Chemistry Rocks!’ (pp. 48-50)

News of the Week

Antibodies produced from carrying multiple male fetuses could help explain why having older brothers increases a man’s likelihood of being gay
(p.6)

A greener way to get lithium?

Regulator says the combined firm will wield too much power in the titanium dioxide market
(p.12)

Obsidian launches with $49.5 million to fine-tune cellular and gene therapies

Tunable technology was born in the labs of Stanford professor Thomas Wandless
(p.12)

Russia is now the sole source of carcinogenic mineral for the U.S.
(p.16)

Regulation proposed in 2009 but dropped because of cost, industry opposition
(p.16)

These giants of chemistry will be missed by the scientific community
(p.39)

Improving the employment of chemical professionals

Chemists and chemistry enthusiasts demonstrate to the public the many ways that ‘Chemistry Rocks!’
(pp. 48-50)

Photos and quotes from 2017

Science news from around the world

Molecules of the year

Electrosynthesis got chemists charged up

Researchers got the first detailed look at how catalysts crank out polymer chains
(p.27)

Chemicals that made headlines

Experiment demonstrated that fixing the molecular basis for the disease could restore lost function
(p.45)

The variety of porous, metal-free crystals and their applications has grown, but no signs yet of commercialization
(p.44)

C&EN compares snapshots of the chemistry scene today and a decade ago
(p.46)

A decade after a key structural analysis, scientists have a better understanding of the pharmaceutically important family of receptor proteins
(pp. 42-43)

Motor molecules made into muscles

Uranium doubles up as a catalyst

Chemists develop a metal complex that provides the best evidence yet for reversible two-electron redox properties in an f-block element
(p.11)

Aluminum sulfate traps phosphorus in sediment so it doesn’t drain from farms and pollute waterways
(p.11)

How oysters and whales are more like us than we thought

What made headlines in 2017