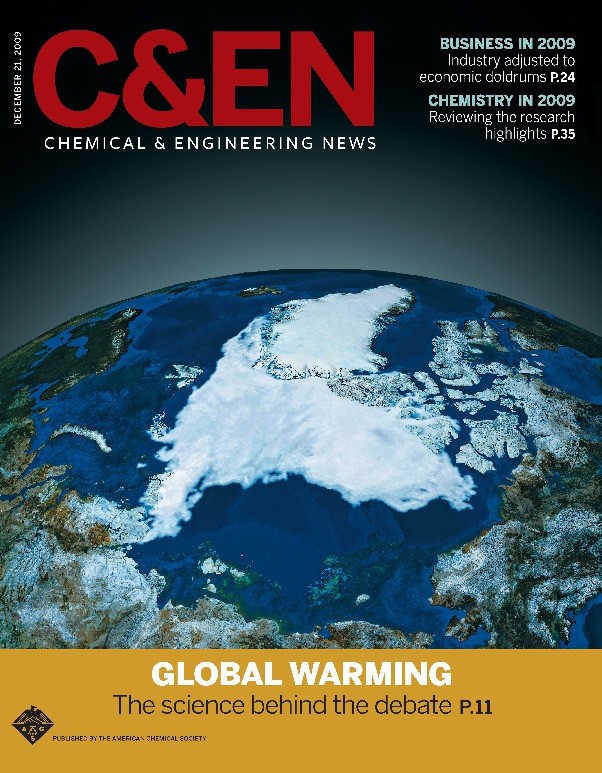 COVER: Image of Arctic ice conditions at the end of the melt season in 2007 shows large areas of open water and an ice-free opening through the Northwest Passage that lasted several weeks. It was the lowest extent of Arctic sea ice on record.
Credit: NASA
» Full Article

Although one of the worst years in memory for the chemical industry, 2009 had a few bright spots (pp. 24-29)

Which Comes First, CO2 Or The Heat?Web Exclusive

News of the Week

Bankruptcy: LyondellBasell and Tronox work with creditors while possible buyers look on
(p.9)

Although one of the worst years in memory for the chemical industry, 2009 had a few bright spots
(pp. 24-29)
Concentrates

National Chemistry Week's celebration of the elements gets kids thinking outside the box
(pp. 44-48)

Seyferth Stepping Down As Organometallics Editor

Reflections On ACS: Past And Future

Senate considers some dozen bills with a strong tie between jobs and energy
(p.31)

Congress sets agencies up with research funds, struggles with other matters
(p.32)
Concentrates

Which Comes First, CO2 Or The Heat?

New And Notable In The Chemical Industry
(p.40)
Concentrates